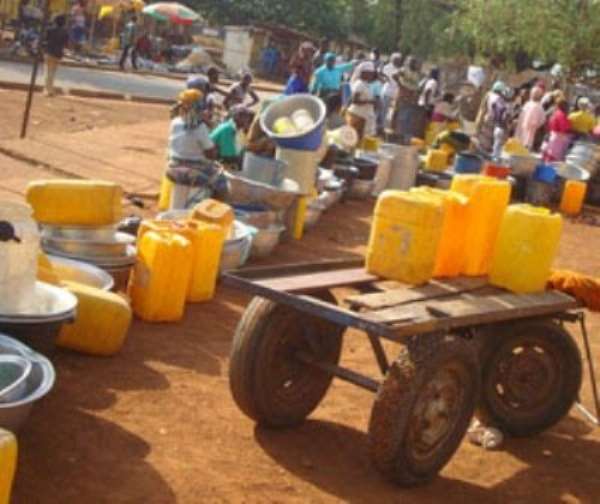 He said for the past two weeks the Ghana Water Company in Yendi had not pumped water to the township due to the drying up of River Dakar, the main source of domestic water for the area.

Mr. Chandoo made the appeal when he briefed the media at Yendi about the water situation.

He indicated that every day, men, women and school children carried yellow jerry-cans and drums looking for water from the few boreholes in the Municipality.

He said others travelled to Malzeri, about 65 kilometers away, to fetch untreated water from the dam, adding that if care was not taken, people will be infected with water-borne diseases particularly guinea worm.

He indicated that with the continuous population growth of Yendi, the River Dakar could no longer supply enough water to the people especially during dry seasons.

He appealed to the Government to treat as a matter of urgency, the implementation of the Yendi Town Water System project by which the township will be connected to River Oti which is 241 kilometers away, as the main source of domestic water supply for Yendi.

According to the Assemblyman that will be the only solution to Yendi's annual water shortage problem.

Mr. Chandoo said with the construction of the Eastern Corridor Road the population of Yendi will increase since people are acquiring plots to put up residential houses and hotels to do business.

According to Mr Shaibu, the Municipal Chief Executive, Mr. Issah Zakaria was soliciting support from the contractor constructing the Eastern Corridor Road to dredge the river to increase its water holding capacity and open up the intake gate which was currently blocked by mud to make the flow of water easier.

He appealed to the Assembly and the traditional authorities to stop people from farming along the banks of River Dakar, saying that it was the main cause of siltation.