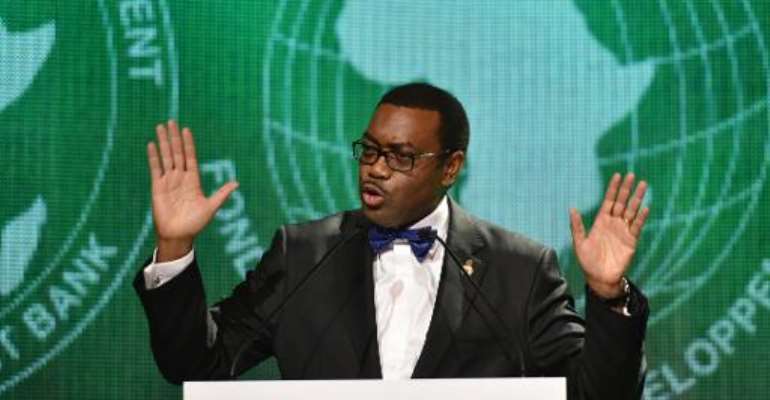 The new president of the African Development Bank Akinwumi Adesina delivers a speech on May 28, 2015 in Abidjan following his election. By Sia Kambou (AFP/File)

Lagos (AFP) - Nigeria's outgoing agriculture minister Akinwumi Adesina has risen from humble origins to become the head of the African Development Bank at a time of economic transformation on the continent.

The son of a poor farmer earning 10 US cents per day in Ogun state, southwest Nigeria, 55-year-old Adesina gradually climbed the social ladder, according to friends.

He earned a first-class honours degree in agricultural economics from the southwestern University of Ife and a doctorate in the same subject at Purdue in the US midwest in 1988.

Before becoming a minister in 2011, he worked for the Alliance for a Green Revolution in Africa and held senior positions in agricultural bodies around the world.

In 2013, Adesina was named African Person of the Year by Forbes magazine for his agricultural reforms. "He is a man on a mission to help Africa feed itself," the publication said.

"My goal is to make as many millionaires, maybe even billionaires, from agriculture as possible," he said while accepting the Forbes award.

Nigeria is Africa's most populous nation and biggest economy, and a leading shareholder in the AfDB.

The appointment of Adesina, after months of intensive lobbying across the continent, breaks the unwritten rule that the top job should go to someone from a small to medium-sized country.

- 'Finish off the white elephants' -

The new chief told AFP in late March that he wanted to "finish off the white elephants", in a reference to useless luxury projects that are often financed using international aid and built by foreign businessmen, and which reek of corruption.

He called for "intelligent infrastructure that is more productive, more competitive".

He also urged more cooperation across borders, pitching ideas such as an "African Google", a transnational electricity market, and a regional stock exchange.

Nigeria, Africa's biggest oil producer, has long been urged to reduce its reliance on crude by diversifying its economy, including in agriculture, which supports more people.

Admirers say transparency has improved in the administration and distribution of fertilisers, which had long been riddled with inefficiency and corruption.

Adesina said last year his aim was "to cut out all the crap within the system" to forge policies that allowed private investors to make money from agriculture in the same way as energy.

UN Secretary-General Ban Ki-Moon described Adesina as an "eminent personality" who had shown outstanding leadership in his role since 2009 in the UN Millennium Development Goals Advocacy Group.