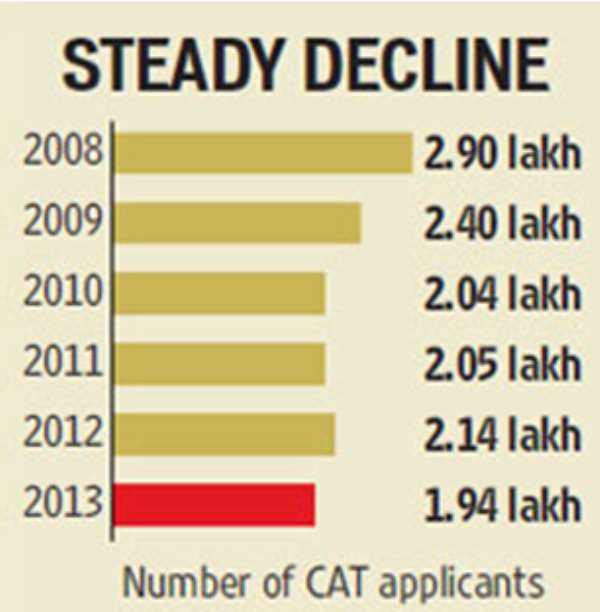 The CAT data whichshow a decline of close to 10% (from 2.14 lac in 2012 to 1.94 lac registrations in 2014) in the number of MBA aspirants over the past 3 years. Does that mean the top B-Schools of the country are losing their sheen? MBA losing its value? Not really. In a recent survey it was found that 3 out 4 MBA grads said that they could not have got in to their present jobs without their MBA.

In fact the CAT applications have seen a steady decline since 2008.Registrations for CAT2013, was at a 5 year low. According to Dr. Jitendra K Das, formerly Professor and Dean (Noida Campus) at IIM Lucknow, also a CAT paper setter, also having taught at IIM Ahmedabad and IIM Kozikhode, currently Director, FORE School of Management, New Delhi, “There is a correction happening which was due. A surge in jobs when the economy was growing at a fast pace led to some sort of ‘MBA Hype’ created mostly without much value offered by quite a few ineffectual B-Schools having AICTE approvals.

As a market correction the enrollments in MBA/PGDM programmes took a dip. And continuing with this correction the enrollments in MBA will attain its sustainable level in time. B-Schools have to provide a beneficial association to students. The incompetent institutions will fade away while the academically serious ones with evolving curriculum and increased industry collaborations will be the preferred choice of the students.”

As the market correction continue to happen, schools which fail to offer value or add significance to the courses are being outright rejected by the smarter generation.

Also on the rise isnumbers of applications to Global B-Schools. Indians have shown a strong presence in global MBA schools and stand second to China. What could be a worrying factor for IIMs or for that matter top Indian B Schools, is the rising GMAT applicant (25% jump) from India.

CAT still remains to be a basic parameter for admissions in top B Schools of the country, but many like Dr. Das feels it is not fair to judge the potential managerial quality of a student only by his CAT score. Schools like SJM School of Management – IIT Bombay or FORE School of Management, Delhi, gives more weightage to other factors and less to CAT during their admission process.

MICA Ahmedabad, do not keep a cut off for CAT. The focus on providing international exposure to students is also getting prominence like at FORE ‘International Immersion’ is a part of the PGDM program. An area, the IIMs clearly lacks.

Is it the format of CAT or the lure of foreign university for which CAT is becoming an old hat for Gen Y & Gen G? It’s yet to be comprehended but what is apparent is rapidly growing cognizance of the stakeholder towards seeking valuefor MBA and in selecting institutes providing academic excellence.