The myth of “moderate” Muslims 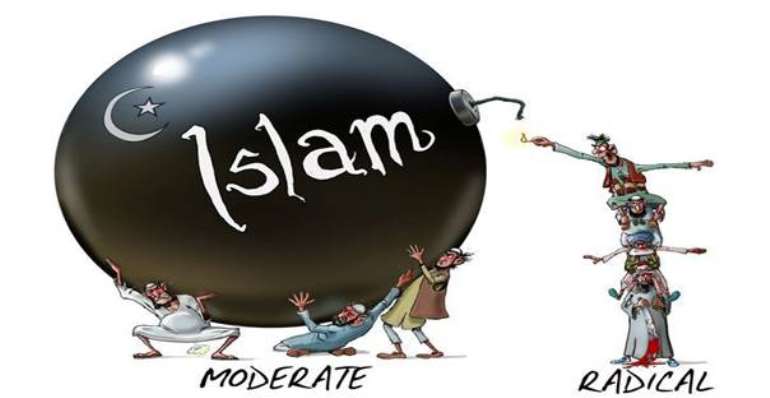 “The terrorists do not speak for over a billion Muslims who reject their hateful ideology…" – Barack Obama.

That was Obama again laboring in vain to dissociate Islam from the ongoing global Jihadist mayhem. The statement may be politically correct - as we non-Muslims erroneously project our benign notions of religion on Muslims - but is it true?

Just because some Muslims are not involved in violence does not mean they are moderate.

Not every Muslim has stomach for the gruesome blood curdling savagery of ISIS and Boko Haram. That does not mean these so-called moderates do not subscribe to the goals and aspirations of violent Jihadists.

We were all witnesses to violent Muslim protests in support of the Charlie Hebdo killers. Churches were attacked and at least 10 people killed in neighbouring Niger republic.

As far back as 1999 (before 9/11) in Obama’s own America, the Sufi theologian, Sheik Hisham Kabbani after surveying 114 mosques, warned in a State department testimony that 80% of mosques in United States preached hate and extremism:


"…the problem with our (Muslim) communities is the extremist ideology… we can say that they took over more than 80% of the mosques that have been established in the U.S. And there are more than 3,000 mosques in the U.S. So it means that the methodology or ideology of extremists has been spread to 80% of the Muslim population…" – Sheik Hisham Kibbani.

Other studies by Centre for Religious freedom (2005) and Mapping Sharia project (2011) similarly documented disturbing extremism in 75-80% of American mosques and Islamic schools.

In Egypt, a 2010 Zogby/University of Maryland poll found that 84% of Muslims support death penalty for ex-Muslims, 82% support stoning to death, and 77% support limb amputations and public flogging.

Yet most of these would ordinarily be categorized as “moderate”, hence the common underestimate of extremists at about 10-15% of Muslims. Not that 10% of one billion Muslims (100 million fanatics) is negligible.

Although I’m not aware of a similar studies here in Naija, I have little doubt the findings would be just as disturbing among Muslims here in our Islamist north.

In the heydays before Seal team 6 took out Osama bin Laden; posters, car stickers and almanacs of the late Al-Qaeda leader were quite popular here in Nigeria’s Islamist north. Clearly, many of our northern Muslim compatriots identified with Al-Qaeda. In fact I distinctly remember that Muslim jubilation of the 9/11 attacks reignited a just concluded sectarian violence in Jos back then in September 2001.

Several polls around the world indicate that most Muslims want some sort of Sharia rule . And the end game of all Jihadist groups (ISIS, Boko Haram, Shabaab, Taliban, AQAP, AQIM, Abu Sayaf, Ansar al-Deen etc) is to establish Islamic rule, whether locally or as part of a global caliphate.

Thus the so-called "moderate” Muslims who subscribe to the notion of Sharia/Islamic rule are complicit in the emergence of Jihadist terror groups. They provide the fertile soil from which ISIS and Boko Haram germinate. Remember that Boko Haram has its roots in the widely popular Sharia agitation of Muslims in our Islamist north.

Of course it is true that Islamists ensconced in power (Saudi Arabia, Iran, Sudan etc) may not need to indulge in the same violent excesses as those like ISIS, Al-Shabaab and Boko Haram who are Jihading to establish their power. That does not make the established Islamists in power “moderate.”

Iran executes more people per capita than any other country. Sudanese police flog an estimated 40,000 women each year for “moral transgressions.” That would be the same Sudan that tried to execute a woman last year for converting to Christianity.

And if the intolerant Wahabis - who build and fund hate spewing mosques / Islamic schools around the world - weren’t in charge in Saudi Arabia, they’d be indulging in the same mindless violence as Boko Haram, Taliban and ISIS.

In addition to providing conducive environment for emergence violent Jihadists, “moderate” Muslims promote Jihadism in other ways. Many of these supposedly non-violent Muslims finance Jihad terror – money Jihad. Oil rich Gulf Arabs (official and unofficial) have been severally implicated in funding terror groups. They handsomely funded the Sunni Jihadis in Syria, some whom have metamorphosed into ISIS.

“Moderate” Muslims also provide propaganda cover for their violent co-religionists, as the “good cop” moderates indulge in all manner of specious sophistry and excuses to defend the “bad cop” Jihadis.

Accordingly, for a long time after Boko Haram insurgency started, many Muslims in our Islamist north continued to shill for the mass murdering Jihadis. They freely retailed the falsehood that the Islamist insurgency only started after police killed Mohammed Yusuf, the innocent leader of hitherto peaceful Boko Haram.

Bamanga Tukur infamously declared Boko Haram as “freedom fighters.” Buhari asserted that war on Boko Haram is “war against the North”… in other words Boko Haram insurrectionists were indeed freedom fighters for our North. Other northern water carriers for Boko Haram demanded amnesty for the mass murdering Jihadis.

Even then, like spoiled brats who never take responsibility for their disastrous follies, the shameless northern shills who had hitherto defended Boko Haram, now disingenuously peddled all manner of idiotic conspiracy theories that President Jonathan, Christians and CIA instigated the Jihadi insurgency. Buhari was among those spinning such ludicrous tall tales .

In the same vein, many Muslims in our Islamist north refuse to sell land to non-Muslims, for fear Christians would build churches. Given this pervasive state sanctioned hostility to churches, is anyone really surprised that every once in a while some Muslims take that hostility to the next level and attack churches?

Despite glib insincere assurances that Sharia is only for Muslims, Kano state Sharia police (Hisbah) habitually confiscates and destroys alcoholic drink consignments belonging to non-Muslims. Is anyone really surprised that Islamist insurgents would also bomb beer parlours and other drinking joints in the North?

The same Kano Sharia police arrests Muslims for eating in public places during the fasting month of Ramadan. How is that different from Boko Haram which endeavours to hijack the coercive instruments of governance to forcibly impose Islamic law?

From my interaction with Muslims in our Islamist north, many of them endorse the arrest of non-fasting Muslims. They don’t seem to realize that it is precisely such pervasive intolerance and extremism that facilitated the emergence of Boko Haram.

Unfortunately, these true moderates who freely intermarry with their non-Muslim compatriots, and have no wish to forcibly impose their religion on the rest of society, are often despised as fake Muslims/hypocrites - munafiqun - by their intolerant co-religionists.

If these authentic moderates found themselves in ISIS or Boko Haram territory, they would be declared infidels (takfir) and beheaded just as surely as Christians, Yazidis and other non-Muslims. ISIS infamously defended itself from Muslim criticism of its failure to attack Israel with the Islamic tradition of first dealing with hypocrites - moderate Muslims:

“Allah gave imperative priority to fight Hypocrites and who rebelled against the faith than staging war with infidels (non-Muslims), so we must first annihilate the liars who pretend to be Muslim and later on we will plan certainly how to fight with infidels such as Israelis and West” – ISIS on Twitter .

It is not for nothing that tens of thousands of Muslims around the world are not flocking to Auchi to imbibe truly moderate Islam, but instead head off to join the mass murdering savages that constitute ISIS. R

eal Muslims kill!! They rape, plunder and persecute non-Muslims just like their psychopath prophet and his murderous gang did 14 centuries ago:

“When the sacred months are over, kill the unbelievers wherever you find them – Quran 9:5

“O believers make war on the infidels (non-Muslims) who dwell around you, let them find harshness in you” - Quran 9:123

“Fight against Christians and Jews that do not believe in Allah or in the last day…and do not embrace the true faith” - Q 9:29

“Strike terror in the hearts of Allah's enemies and your enemies” - Quran 8:60

Ghana Back To HIPC Not True – Oppong Nkrumah
14 minutes ago

Allowance For Workers Who Lost Job Due To Covid-19 — Mahama ...
26 minutes ago