A Letter From An Aggrieved Mother 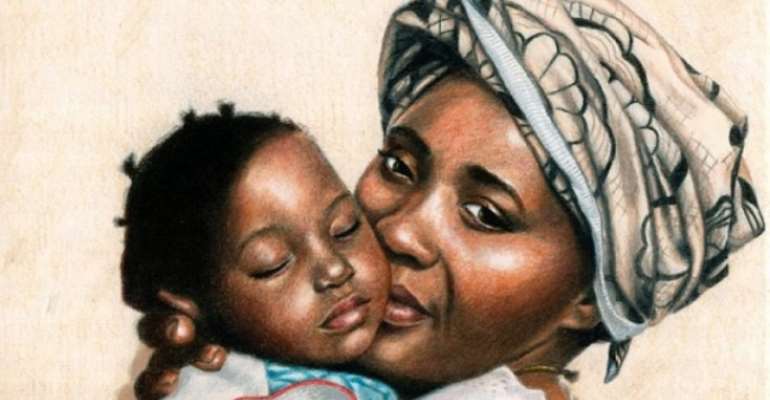 Today is mother's day again, and for the third consecutive year, I'm celebrating mine within the four walls of the Nsawam prison; thank you for this honourable favour. I never wanted to write this letter but coincidentally, today happen to be my daughter Nunana's birthday too. Yes, Nunana; does the name ring a bell? What you didn't know was I affectionately call her Nana. Hmmmm, the very last mother's day she celebrated for me and the last birthday I celebrated for her were spectacular and memorable. I know you might be wondering if poor people like us also celebrate these days. That's the problem I have with you rich dudes, you think you know everything about our world. That day, Nana came home; handed plantain-chips into my hands and with a smile she said: 'happy mother's day, you are the best mommy in the world.' Amidst tears, I asked where she got the money from to which she replied, I've been saving for this day mom. On her birthday, she was so pleased with the Ghc5 second hand shirt I bought for her from the Kantamanto market. It is those memories that are hunting me today and have opened my emotional flood gates. I wish to vent out these feelings before they explode my world.

Today I want to talk to you about that fateful Saturday evening, because in court you never gave me the chance to. I got home really tired after weeding Alhaji's backyard, just to get some money for our offertory in church the following day. Upon realising the Ghc1 I left on the table wasn't there, I confronted my wonderful daughter and she confessed using it to buy candies. In as much as I was furious about her not using the money to buy any 'solid' food, it was the thought of seeing my daughter began a new term in her tattered uniform again that took the greater part of me.

My daughter had been wearing that tattered uniform for the past two-terms and the humiliation she faced from her colleagues due to that is having a great effect on her academic performance. I promised myself to get her a new uniform before the term begins on Monday. The seamstress would not release the uniform until I've paid in full and that Ghc1 would have completed the money I'd been saving towards that for the past three months. I guess the pain and the humiliation of seeing my daughter leave this house in those rags again was too much for me to bear and for the first time, I used the cane on her. But the shout from her prompted me to take a second look at the cane I was holding, only to realise I didn't drop the cutlass I used to weed Alhaji's backyard.

Did you think when I first saw her in her own pool of blood; I jumped into the air and jubilated? I actually broke to the ground in tears. I prayed to God for forgiveness. Immediately, I rushed to the roadside to arrange for a taxi to transport her to the hospital even though I didn't have much money. Do you care to know how I paid the driver? Hmmm, men! After taking us to the hospital, this driver heartlessly insisted I paid with my body. Did I have any option? He did it to me in his car, right there on the streets. And that was the second time I'd ever had sex. But the world never heard this story. The story they heard was, 'woman butchered daughter for Ghc1.' Many people condemned me, the most popular of those condemnations was: 'she did that to her only daughter because of 1ghc?' but what they didn't realise was, to me and my daughter that red Ghc1 note was equivalent to Ghc 10,000.

Growing up is this the kind of life I envisioned for myself? It was a Sunday evening after our vespers; he invited me to the lab to take me through some biology practicals before we start our SSSCE on Wednesday. Little did I know for this particular practical, I would be the sample to be used. Few minutes after I got to the lab, Mr. Yaro, our biology teacher began the practicals with my 'twin towers'. Till today, I didn't know how he managed to know that was my emotional power house. I tried to stop him but the sensation I was feeling was too sweet for me to even make any attempt than to succumb to the power of his fingers and tongue. Tweea, you want me to tell you how the 'real game' went? Your ears inside dey jorm you too much. I was only seventeen and was not involved in any romantic adventure with any guy before then.

Few weeks after I completed my Senior High school education, I realised I was pregnant; of course to Mr. Yaro. My foster parents couldn't bear the shame because they were elders in their local church. I was ejected from their house, to bear my shame alone and face the world all by myself. I got on my knees and cursed the man who assassinated my parents, the owners of Innovation & Renovation group of companies and robbed me of my bright future. Drop that surprise on your face, they were my parents and I was their only daughter. What about their properties and wealth? I was too young to remember much but I remembered how my father's family referred to me as a bastard. That was how I ended up with Mr. and Mrs. Nii, my foster parents. As for my biology teacher, I know posterity will deal with him because he had denied having anything to do with me.

That was the genesis of my suffering. I had an option of aborting the pregnancy and continue staying with my foster parents, but I had thrown away my own dream, their promise of a brighter future and kept the pregnancy. Uncompleted buildings were my home, the street was my source of shelter and I withstood all the harsh treatments and weather conditions just to allow God to perform one of his wonders through me. As to how we managed to survive from the time of her birth to the time you threw me behind these bars, is a story to be told another day. That is why when I finally gave birth to her; I named her Nunana - a gift from God. To me she wasn't just any gift but a precious one at that. And ever since, I loved her with every fibre of my being, I've never laid a finger on her and God is my witness; I gave up my own future so she could have one. But this is the girl you and the Judge have portrayed to the whole world that I've never cared about. It was as a result of the love I her for her. Yes, but inside of this love was the pain of a poor woman struggling to give her only daughter the best of life. Gooossssh! You told the whole world I never loved my only daughter! I guess you don't know what true love is……….

Kindly ignore the spots on the paper; they are just the tear drops from my eyes. Madam prosecutor, I never meant for this to happen, but the more I tried controlling my emotions the more the tears kept dropping. So I had to rely on the dead goat syndrome mentality and simply allow it to flow. I pray thee; this act does not earn me some few more years to the seven I already have remaining because it's really funny how you guys read damning meanings into things. I know you can easily interpret the poor state of the paper as an offence against the court, ooh nooo, I wish to use the right term; ahaaa! Contempt against the court. I trust my daughter is fine and thanks once again for bringing the prison walls between us.

My best regards to you and Judge Yentie Obiaa, happy mother's day to you two.

From a loving mother,
Nsawam Prisons,
Block B; Rm 237.