Lobbying intensifies for IDEG boss Akwetey as the next EC Boss 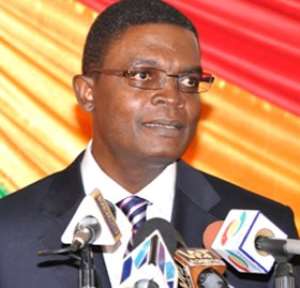 The Executive Director of the Institute of Democratic Governance (IDEG), Dr Emmanuel Akwetey, is being backed by an NGO to become the new chairman of the Electoral Commission (EC).

The People's Actions to Win Life All-Round (PAWLA) has called on President John Mahama and the Council of State to consider the IDEG boss because he is capable of replacing soon-to-retire Dr Kwadwo Afari-Gyan.

PAWLA described Dr Akwetey as a transparent, accountable, honest, non-partisan and a unifying personality, adding that his independent mindedness and high sense of integrity gives him the capacity to consolidate the gains made in Ghana's democratic governance.

The statement referred to Dr Akwetey as a competent academician and an accomplished manager who is a very passionate advocate of peace, democratic governance and human development as well as civil participation in credible management of multiparty democracy across Africa.

Dr Akwetey, who is a Political Scientist with a PhD in International Politics and Development obtained from the University of Stockholm, Sweden in 1994, is widely consulted on issues of political and administrative transitions as well as international aid and development effectiveness, the statement said.

A current member of the Commonwealth Eminent Persons Group and one who partnered several bilateral and multilateral institutions to implement their capacity development vision for Ghana and Africa as a whole, Dr Akwetey recently won for IDEG, the 'Millennium Excellence Award' for Democratic Development in Ghana for the period 2005 - 2010, the statement said.

The statement revealed that the governance, peace and democracy ace, had been recently presented with the 2015 Martin Luther King Jr. Award for Peace and Social Justice for his role in Ghana's pre and post-election environment through his initiation of dialogue among political parties and other stakeholders.

Dr Akwetey's commitment to decentralisation and fight against corruption within governments coupled with his non-partisan and enormous contribution towards electoral reforms in Ghana and other African countries makes him a very strong candidate for the new EC Chairman's position.

PAWLA therefore appeals to the President to search no further but appoint the IDEG Executive Director to the new EC Chairman's position for him to bring his knowledge and experience bear in order to move Ghana's electoral credentials to a higher pedestal.

'This, the country can continue to live on its glory of being the beacon of democracy in Africa,' the statement said.

Let's Avoid Second Wave Of COVID-19 By Following All Protoco...
7 minutes ago