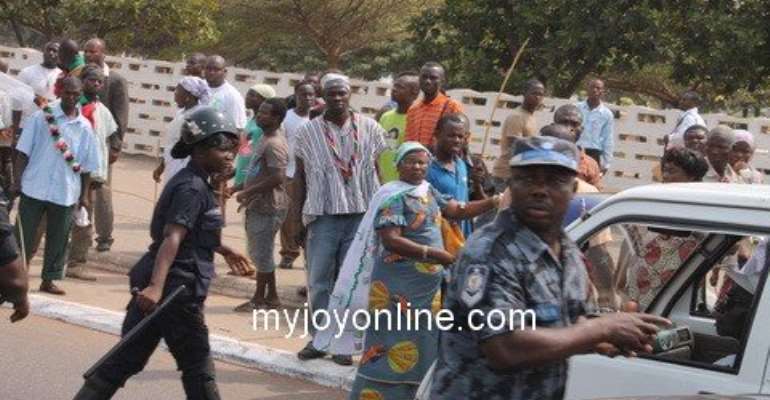 Residents of Salaga South Constituency in the Gonja East District of the Northern region fear the situation could turn bloody as two feuding factions of the governing National Democratic Congress (NDC) set to clash tomorrow.

As tension mounts in the area, residents are calling for the immediate intervention of the security agencies in the area to prevent the two groups from locking horns tomorrow in a street protest.

One group is protesting against the DCE Mohammed Amin Lukman's lack of respect for constituency executives and abuse of office. The group also accused him of failing to bring development to the area and are using tomorrow's protest to demand his immediate removal, among others.

But another group is preparing a counter-protest in support of the DCE.

The Salaga South Constituency Secretary of NDC, Thomas Langa told Myjoyonline.com the regional executives on Sunday met the first group in an attempt to calm tempers.

He indicated that the group had agreed to suspend tomorrow's action when a rival group supposedly organised by the DCE showed up, promising to deal with those who intend to protest against the DCE.

There have been pockets of protests since the nomination of Mohammed Amin Lukman in July 2013. Angry NDC Youth in Salaga destroyed properties and billboards bearing the name of President John Dramani Mahama when he was nominated.

In February this year, a sanitation visit by a deputy minister of Local Government and Rural Development, Emmanuel Kwadwo Agyekum to the East Gonja District was nearly marred by NDC party executives who condemned the DCE's “snobbery” and “divisive” attitude towards the elected executives.

“They (group) wanted to hear from the DCE, they called the DCE to hear his side of the story, and he came around with another group of boys who had a kind of scuffle with some of the constituency executives…”

He reiterated the concerns of the youth which he said had already been raised by the executives describing it as an exoneration of their complaints to the regional executives.

“They brand him as being arrogant, that he misuses the official vehicle, he gives it out to friends and other people to drive around. They are also raising issues that they have not seen any development in the area since he took office, they are also of the view that on several occasions he has had some confrontations with the legitimately elected executives of the constituency, by way of lack of support, he attends function with allied group that he has formed after the executives. The other issue the raised yesterday when the Tamale group came around was that he claimed he had lobbied his position from the top and he had the support of the top but he would pay heed to no other person.”

He noted that the atmosphere was “charged” when the Tamale team arrived at the meeting with the regional executives.

“The other faction that had earlier agreed to allow the regional team find a solution to the problem also got angry and didn't understand why they were persuaded to leave while the other group from the DCE came to launch a counter attack. As much as we tried to stop them, they have vowed to continue their demonstration.”

However, the DCE Mohammed Amin Lukman has discounted any planned demonstration against his stewardship.

He also denied flatly any meeting by the regional executive over the group's agitation.

“I have not organised any group to counter any demonstration, and then as chairman of DISEC (district security council) nothing has come before DISEC that is involving demonstration tomorrow. I don't know of anything that is ready for tomorrow, no.”

It is not clear if the group has obtained permission from the police to embark on Tuesday's demonstration.