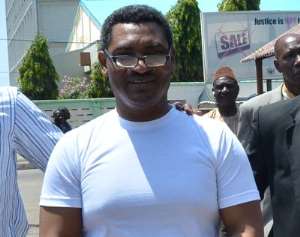 The witness, Sergeant Francis Odei-Asiedu, who is also the investigator in the case gave his full evidence in the case but was heard in camera.

He is expected to be cross-examined by the defence Counsel for Dr Gabass on the next adjourned date.

The case was adjourned to February 19.
At the last sitting, the Defence Counsel for Dr Gabass, ended its cross-examination of the State's second prosecution witness, Manasseh Azure Awuni, a journalist.

Earlier, Deputy Superintendent of Police (DSP) Aidan Dery told the court that the accused person resides in Takoradi in the Western Region.

DSP Dery said in September last year, the victim became Dr Gabass's friend on Facebook, a social media platform, and they chatted on line and on the cell phone.

The prosecution said the victim fell ill and when he informed Dr Gabass, he prescribed 'paracetamol' tablets for him.

He complained to the accused person, who gave him money to receive medical treatment but the victim did not go for the treatment.

The prosecution said when the victim's condition worsened he was sent to the Ahmadiyya Mission Hospital but was referred to the Korle Bu Teaching Hospital.

The prosecution said when the accused person was informed about the victim's plight, he sent GHâ‚µ 800 through the victim's elder brother to cater for his hospital expenses.

The prosecution said while on admission, the witness got wind of the matter and interviewed the victim, conducted background checks on the accused person, who was also interviewed.

Following media publications, the police initiated investigations into the matter and the Domestic Violence and Victims Support Unit in Sekondi arrested Dr Gabass.