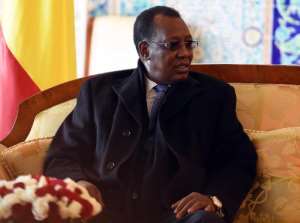 Libreville (AFP) - Chad's President Idriss Deby has taken up the fight against Boko Haram at the risk of offending diplomatic sensibilities in Africa, but to the delight of his international allies.

One Western diplomat described Deby, who seized power in 1990, as "first and foremost a fighter", who for years had battled rebels intent on ousting him from power, while at the same time arming those fighting the authorities in neighbouring Sudan.

When oil began to flow in Chad in 2008, he defied the World Bank after they granted the country a loan on condition that some of the revenue go to education and health.

Instead, he used the oil money to re-equip his army with modern weaponry.

Chadian rebels in the country were routed while Deby played the region's policeman, a role he carried out ruthlessly.

Western powers have long criticised Chad's lack of democracy and military expenditure but were nevertheless glad to be able to count on Deby's troops in Mali.

Chadian soldiers came under fire alongside the French in the fight against Al-Qaeda-linked rebels, thousands of kilometres (miles) from N'Djamena.

Those same powers are now relieved to see Deby taking charge against Boko Haram, after years of ineffective action by the Nigerian army and the government in Abuja.

They have also turned a blind eye to the mess in the Central African Republic, where Deby added fuel to the fire but was then unable to douse the flames himself.

For the international community, support for a president who has been in charge for the last 25 years and been accused of trampling over fundamental rights means treading a fine line.

"You have to know what you want," admitted one French diplomat recently when Paris put the headquarters of its Operation Barkhane against Islamist groups in the Sahel in Chad's capital.

The French already had a military base there.

"You have to find a balance between democratic aims and security necessities as part of a sometimes lively but necessary dialogue, even if the priority at the moment is security," French Defence minister Jean-Yves Le Drian told the Jeune Afrique weekly.

French President Francois Hollande meanwhile "praised the courage of Chad" for not waiting for a regional force to take shape before taking on the Islamists.

Deby maintains that Boko Haram threaten Chad's "vital interests" and so sent troops to Cameroon and Niger without waiting for a regional force to be formally set up.

At a recent African Union summit in Addis Ababa, he put diplomatic niceties to one side in favour of military plain-speaking.

"We're on the ground with our Cameroonian brothers because (there are) too many meetings and no concrete action," he said.

"We can't wait until such a resolution is taken or authorisation is given. We are engaged and it's incumbent on everyone of good faith to follow us and support us in our action," he added.

In short, Deby is making out as if he's in charge, despite Abuja's claims of a "joint effort" of regional powers and insistence that Nigerian troops are leading operations.

"Please, let's stop advancing this misleading idea that Nigeria has become so weak and helpless to the extent that it's only being helped by Cameroon or Chad hence is obliged," Nigeria's defence spokesman Chris Olukolade told AFP.

"The combined effort is helpful to everybody, not just Nigeria."

The African Union was also irked as countries led by Deby in the Lake Chad region, where the borders of Chad, Nigeria, Niger and Cameroon converge, asked for UN support first.

On the Cameroon side, the intervention of Deby came as a great relief, with Yaounde's troops close to breaking point in the border regions.

Even President Paul Biya, usually abstemious in his public comments, said he "warmly welcomed this gesture of fraternity and solidarity" from the Chadian president.

There are still dissenting voices, however, with some Cameroonians fearing collateral damage from Chadian soldiers often perceived as trigger happy.

Back home, Chad's opposition, which was very critical of the intervention in Mali and the deaths of Chadian soldiers on a distant battlefield, have this time swung behind the president.

Nevertheless, he pointed out that the fighting will not put an end to "the same injustices (and) the same pillaging" in the country.