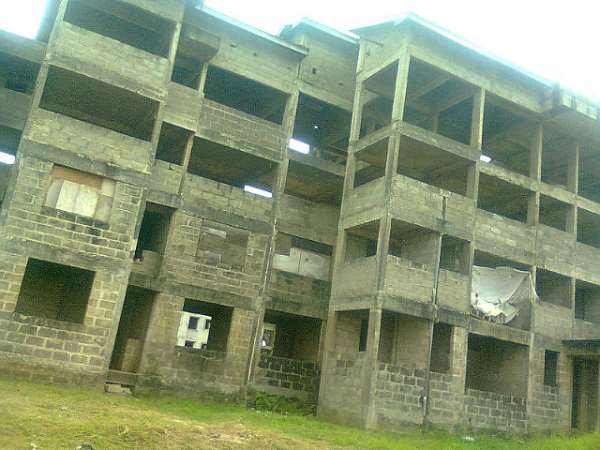 Acute housing shortage is one main problem facing the ordinary Ghanaian worker. Rapid population growth, coupled with an uncontrollable rate of urbanisation has resulted in high demand for housing needs. According to government statistics the country requires about 120,000 housing units annually but supply rate currently is only 32 per cent per annum. It was also disclosed that the country has a backlog of about 500,000 housing units while supply figures are between 25,000 and 40,000 units per annum, as against an annual requirement of 100,000 units.

In attempt to solve this menace the Affordable Housing Programme was introduced in 2005. The aim of this project was to provide houses to low and middle income workers of the country. The project was estimated to provide at least 12,000 families or over 60,000 persons with accommodation. A Financial scheme was put in place to assist those who want to go on the property ladder for the first time. Applicants were to get assistance from the banks to obtain mortgages to purchase the houses. Seed money of $10 million was provided by the government to HFC Bank Limited, as a revolving fund for the scheme. Under the scheme, public sector workers could access funds up to GHA¢25,000, to complete or purchase their own houses. Applicants would need to pay a deposit of GH¢4,000 out of GH¢25,000 for a two-bedroom house and the rest of the payment spread over 16 years.

Scope and Objective of the Project
The scope of the project was spelt out to the stake holders i.e. the construction of 100,000 housing units at Borteyman and Kpone both in the Accra. The objectives were also made clear. This housing scheme would help in solving the acute accommodation problem in Accra. An amount of over 300 billion cedis was committed to this project. In September 1, 2005 a sod was cut to mark the commencement of this multi-million dollar affordable housing project.

Work Breakdown Structure (WBS)
The initial plan of the Accra project was well executed. It was divided into small and more manageable components in the project scope and given to about 200 contractors to execute. They were to execute the project in two phases. The first phase of the project was to be the construction of 113 four-storey flats containing 1,138 units at Borteyman, and another batch of 1,400 units at Kpone. The government planned to build about a hundred thousand housing units by 2011.

The problem started occurring when the contractors were not receiving payment for completing some of their scheduled activities. Since the project was to be in components some of the activities had to be complete before others could begin. For instance the foundation floors needed to be completed before actual block work could begin etc. Depending on the initial agreement with the stakeholder the contractors needed to be paid in stages. Anything short of that could spell disaster and that was what happened.

Some of the project components which should have been handled as critical path were affected by the delay in supply of building materials. This caused unnecessary delays in implementing the project plan.

The Project Manager (PM)
The project managers at the two sites did not live up to expectation with regards to execution of the projects. They definitely would have had access to information on funding streams and financial situation with regards to cash flows. They could have communicated this to the contractors early enough so they could move resources from float areas to critical path activities.

Apart from the above the contractors would have expressed concern about the absence of security on site at status meetings. Why was action not taken by the PMs and the stakeholders? This negligence resulted in the stealing of 200 bags of cement from the site. There was an instance when a truck load of building materials was carted from the site in broad day light. These thefts will definitely increase the cost of execution of the project. The concerns of the contractors with regards to the delay in receiving payments from the government were not properly handled.

Resource allocation
The execution of such a project involved numerous activities and each activity required resources (e.g., people, material, equipment) and time to complete. The project on the whole lacked the massive capital injection required for its completion. How on earth could the government embark on such a large scale project without having the slightest idea on how to fund it? The initial plan was to raise part of the funds from the HIPC fund but that never materialised. This caused unnecessary delays in supply of resources. For instance in Borteyman, the Chief Supervisor of Habitat Ghana Limited, expressed much concern over the delay in having access to blocks. As a result 200 bags of cement were wasted.

When it became clear that resources were not forth coming what the PMs could have done was to adopt resource leveling method. Resources from float areas should have been moved to critical path activities for those critical paths to be crushed. This crucial action was not taken resulting in delays in the implementation process.

Project control systems and risk management
The project was politicized with many political gimmicks as to why the funding was not forth coming. The then Minister for Water Resources, Works and Housing Alhaji Abubakar Saddique Boniface was just interested in parading pressmen at the site for propaganda purposes. He hijacked the project and gave the PMs very little room to operate. What could have been a very successful project was marred by lapses in the control systems in place. Control systems for cost, risks and procurement were ignored.

Considering the information coming from the project site, one can say the PMs erred on the side of caution. There were reports that some contractors undertaking the project vanished from the site and could not be traced. Most of these contractors had taken their mobilisation fees and vanished into thin air. They could not be contacted on the phoney telephone numbers they left behind. Some of the contractors had to be suspended in the end. How could such a very important national project be awarded to companies with very little credentials? These are the usual phoney companies which usually obtain contracts through back doors because the president or a minister might be a nephew or a niece. The tax payer is the one who suffers in the end.

The political twist to the project
The politicians did not wait for the project to complete its life cycle before they started doling out the houses to their cronies. Mr Hackman Owusu-Agyeman former Minister for Water Resources, Works and Housing was reported to have allocated 130 housing units to some individuals before leaving office. This is a bit strange. Why such haste? According to Daily Graphic reports, the Office of the former President had been allocated 51 flats, while the Office of the former Vice President had 19 flats.

The most worrying part of this twist is ordinary workers who applied for these houses and were written to by the sector ministry that their applications are been considered have been left in the lurch. Some of them took huge bank loans in order to settle the initial deposit. They are now saddled with loans they have to spend the rest of their lives settling. Workers' hope of running from the slum areas of Accra to the ultra modern housing facilities at Kpone and Borteiman has been dashed. Families have been shattered and their hopes crushed. They now have to pick up the pieces and pretend nothing has happened. Meanwhile the politicians and the technocrats who caused them these pains will be laughing their way to their foreign accounts where they have stashed their ill gotten wealth.

Conclusion
The affordable housing scheme was a very vital national project which would have had a positive impact on the lives of ordinary Ghanaian workers. The project itself was a good idea considering the way tenants are exploited by landlords particularly in the urban centres. A successful completion of the project could have been a big plus to the NPP government during the 2008 election but poor financial projections and resource utilization caused undue delays in the execution. The project which was to be commissioned by the former president JA Kuffour as a climax to his eight year rule became mirage. A visit to the Koforidua site of the affordable houses on the Koforidua – Akwadum road for instance is really a sorry sight. It has been taken over the weeds, rodents etc. All one can see is concrete pillars and skeletal structures.