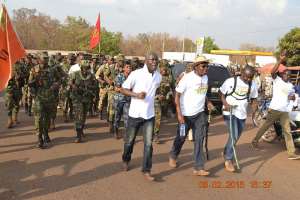 Tamale, Feb. 7, GNA - Residents of Tamale Metropolis on Friday embarked on a root march through some principal streets, to herald the National Sanitation Day (NSD) clean-up exercise on Saturday, February 7 in Tamale.

Mr Abdul Hanan Gundadoo, Mayor of Tamale and Mr Julius Debrah explained to the GNA that the essence of the exercise was to arouse public interests to patronise the clean-up exercise.

Mr Gundadoo said the Tamale Metropolitan Assembly, as part of the clean-up exercise, would collect heaps refuse in the Metropolis, which had been left unattended to for years to give the metropolis a facelift to regain its past glory as the cleanest city in the country.

He said the campaign would help change the attitude of the citizenry towards indiscriminate dumping of refuse and to promote environmental and public health and also facilitate development.

He expressed the hope that the NSD in the Northern Regional would be the most successful in the country and assured that the metropolis would not relent in its resolve to keep the city clean.

Mr Julius Debrah appealed to all Ghanaians to support the Ministry to promote and sustain the campaign to protect the citizenry from diseases such as Cholera and other preventable environmental diseases.

He said this would ensure that the citizenry were healthy to discharge their duties well, saying, "a healthy people build a healthy nation".