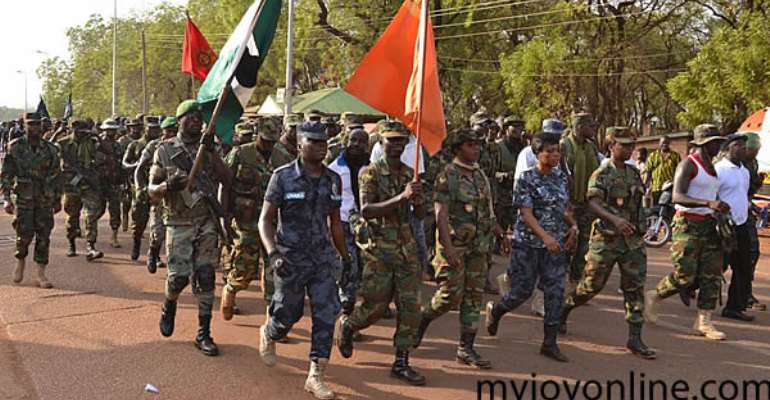 Business in the central parts of Tamale came to a virtual standstill Friday when record numbers of residents abandoned their homes and wares to watch the security forces engage in a historic march in the city.

Uniformed police and military men marched through the principal streets of the Northern Regional capital in preparation for Saturday's National Sanitation Day activities there.

Led by a fearsome military vehicle, the security forces marched to draw attention to Saturday's event and to emphasise its importance.

The streets went agog with wild chants and cheers when boxers Bukom Banku and Ayittey Powers, who are in Tamale to support the clean-up activities were spotted on the streets.

This month's National Sanitation Day is being marked in Tamale in accordance with the Local Government Minister, Julius Debrah's determination to make the programme a successful one by giving it a national character.

Government instituted the NSD as part of efforts to rid the country's cities and towns of filth.

Ghana has a rather very poor record in terms of sanitation.

According to Mr. Debrah, Ghana ranks amongst the top 10 countries with the worst sanitation record. The country is competing for a place amongst countries such as war-torn Somalia, and fragile South Sudan and Chad, a situation he says should concern every Ghanaian.

All citizens must be ashamed of the country's sanitation status and recognize that they have a shared responsibility in ensuring that the situation is reversed, he stressed.

The first Saturday of every month has been declared a National Sanitation Day where citizens are required to clean their streets, homes, schools, and all public places.

The event got off to a promising start on November 1 last year with both President John Mahama and Vice-President Kwesi Amissah Arthur participating in the clean-up exercise.

In other parts of the country, traditional leaders such as the Asantehene Otumfuo Osei Tutu II, Okyehene Amoatia Ofori Panin, Muslim chiefs and imams participated in the activities.

Mr. Debrah is waging a relentless campaign against littering in an apathetic society, but the security forces provide a glimmer of hope.

At the last sanitation day held in the Ashanti Regional capital, Kumasi, the regional police Commander, DCOP Kofi Boakye, and his men actively participated in the exercise.

The security forces in Tamale appear to be showing an even higher commitment given Friday's march.

Some local leaders also joined in the march to demonstrate their support for the campaign.