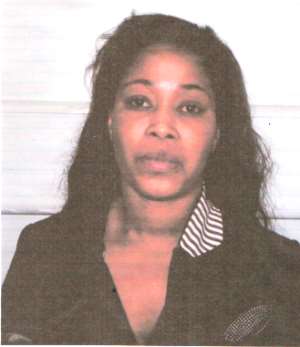 Akua Adubofo, the 58-year-old mother of incarcerated drug baroness Nayele Ametefe aka Ruby Adu-Gyamfi, has been provisionally charged for assault and would be sent to court any time soon.

Madam Adubofo, according to police reports, assaulted an official of the Narcotics Control Board (NACOB) who was on official duties, for taking pictures of the residence of Nayele Ametefe who is currently serving an eight-year-eight-month jail-term in the United Kingdom (UK).

She was arrested in the UK on November 10, 2014 after using the VVIP lounge of the Kotoka International Airport to embark on the trip that led to her waterloo.

The NACOB official, who was in the company of his colleagues, was assigned to begin the process for possible confiscation of the properties suspected to have been acquired directly from the proceeds of the drugs trade by the suspect's daughter, Ruby.

The NACOB officials had gone to the East Legon house of the convicted drug dealer to paste seizure notices on the building when the brawl ensued.

Madam Adubofo, the reports indicated, was unhappy with the conduct of the NACOB officials and allegedly slapped one of them.

Tooth Removed Unconfirmed reports indicated that a tooth of the NACOB official fell off due to the intensity of the slap.

A formal report was then lodged with the Airport Police Command last Wednesday by the assaulted party and Madam Adubofo was invited and detained by the police on Thursday.

Superintendent Yao Tetegah, the Airport Police Commander, confirmed to DAILY GUIDE that Madam Adubofo was granted bail the same day since the offence was a bailable one.

'Police have since invited witnesses in the case to give their statements after which the matter will be sent to court for prosecution,' the police chief said.

Supt Tetegah said the duty of the police is to investigate any matter brought before them, irrespective of its nature, after which it will be sent to court for prosecution, if need be.

He could not tell when the case would be sent to court but added that it would surely happen unless the parties involved express their disinterest in the case.

Interrogation Meanwhile, a member of the National Democratic Congress (NDC), Abigail Akwambea Mensah, says the mother of Ruby must be interrogated on the cocaine saga.

Abigail Mensah, who contested for the deputy youth organiser position of the NDC with the result still pending after a dispute, said on Joy Fm Newsfile programme on Saturday that Ruby's mother could not be completely unaware of her daughter's illegal activities.

She said the state must subject Madam Adubofo to thorough interrogation to ascertain if there was any level of complicity.

Lawyers for the convicted drug baroness, in pleading for mitigation for their client, said Ruby had been introduced to a lavish lifestyle after divorcing her husband.

And with three children to take care of, as a single mother, she found the drug trafficking business quite lucrative.

But Abigail Mensah would not have any of that, insisting that the convict, who got married at 16, could have taken care of her three children without resorting to the peddling of drugs.

She said all of Ruby's assets acquired through the proceeds of cocaine must be confiscated to serve as a deterrent to other young women who might see the drugs trade as lucrative.

While criticising Ruby, the NDC member said Madam Adubofo must also take some responsibility for what happened.

She wondered how Ruby's mother enjoyed the largesse from the cocaine proceeds without asking questions as regards where the money was coming from.

Another member of the panel, Afi Agbenyo, a social activist, however said NACOB officials ought to have been a bit more diplomatic in dealing with the mother of the convict.

She said already she might have been going through some trauma following the incarceration of her daughter and would obviously not be in a good mood if NACOB officials went to her house to begin confiscation processes.