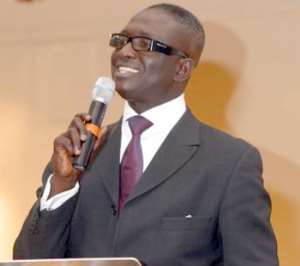 When Kwasi Kyei Darkwah, a celebrated radio and television personality in Ghana, was recently accused of rape by Ewuraeffe Orleans Thompson, a woman thirty years younger than the accused, the incident brought to the fore a smorgasbord of emotions concerning the licentious abuse of women by ostensibly powerful men in androcentric societies. My decision to write this article is not predicated primarily on what occurred in a bathroom stall at the African Regent Hotel; rather, I want to use the aforementioned incident as a springboard to draw attention to how men generally (mis)treat women in Ghana and other African nation-states.

There is a maxim that powerful men are drawn to extremely attractive women – preferably women who are younger than their suitors; the same goes for very attractive women being drawn to men of power. In fact, relationship buffs would argue that societies, going back to medieval times, have always operated in this manner. These maxims do not, however, validate rape or sexual abuse of women – and herein lies the obvious difference between consensual sex and forcible sex. Do not misunderstand my position – I am not arguing that Kwasi Kyei Darkwah raped Ewuraeffe Orleans Thompson.

What is apparent from the aforementioned incident is the notoriously familiar storyline: a powerful Ghanaian male meets an ordinary Ghanaian female and decides to take away her honor. That is it, folks! Every day on Ghanaian soil, tens – perhaps hundreds – of young, innocent Ghanaian women are subjected to “consensual” sexual activity by men old enough to be their fathers. Some poor soul's daughter or sister or mother is being raped or sexually abused this very moment, and you, dear reader, will never read or hear about it because the rape or sexual abuse will never be reported to the police.

My question is this: Why was a 49-year-old man interested in a 19-year-old woman? More importantly, why was Kwasi Kyei Darkwah convinced that he could “dine on” Ewuraeffa Orleans Thompson without any repercussions? Because Darkwah believed he could get away with it – whether the sex was consensual or otherwise. In fact, as a criminologist who understands the antecedents of criminal behavior more than the average person does, I am willing to go on record that Kwasi Kyei Darkwah had previously engaged in “consensual” sex with other women who were either too afraid to say “no,” or who simply decided it was not worth the publicity by coming forward and filing a formal complaint with the police.

Indeed, Kwasi Kyei Darkwah epitomizes the powerful Ghanaian male who assumes that all women – married and unmarried, adolescent and adult, child and prepubescent – could be “dinner” any day. From our elementary schools to secondary schools to universities to workplaces to courthouses to Parliament, our poor girls and women are regularly subjected to sexual harassment and, where bolder Neanderthals are involved, statutory rape and rape. Women are sometimes forced to trade sex for jobs, although they may be far more qualified for these jobs than those rascally, good-for-nothing male managers with unrestrained libidinal propensities. It gets worse for the girl or woman if the man involved holds political office; in that case, she could lose her life if she dared to report the incident to the police. Let us applaud our progress, folks! Please, keep clapping!

The latest news item regarding this evolving Darkwah–Thompson saga is that video footage from the hotel's cameras showed the philanderer and the accuser in a licentious embrace before and after the incident. This video evidence is not proof that the sex was consensual, however, as only the two of them – Darkwah and Thompson – were in that bathroom stall at African Regent Hotel where the alleged assault occurred.

My expertise as a criminologist informs the following argument: when women are trafficked for sex, they usually are moved around from hotel to hotel by their perpetrators. These women are also threatened with death, or death to relatives, which is why a trafficked female is very unlikely to call attention to herself even if law enforcement officers were present in a hotel lobby. Thus, it takes a trained person to spot sex trafficking. Correspondingly, Thompson may have been too afraid to raise an alarm while in the presence of the accused – perhaps fearing for her safety, at the least, or for her life, at the worst. Once again, I am not accusing Darkwah of rape; I am only sharing with the reader why Thompson may not have had the courage to file a complaint at the hotel's front desk, but had to wait to do so only after she felt safe enough to go to the police.

So, what is the lesson learned from this incident? Certainly, powerful Ghanaian men are not above the nation's laws, irrespective of their vocation, wealth, or lineage. Ethical or moral considerations also require that men not treat women like discardable toys. These girls and women could be our sisters, cousins, aunts, mothers, and grandmothers. In fact, there is definitive, incontrovertible proof that a society that mistreats its women will remain trapped in the habiliments of mediocrity. Need examples? Just look around. Ghanaian men's depraved behavior toward their fellow female citizens may well explain why the nation cannot make any real progress long after the British relinquished governance of the nation-state to the locals. A collective shame on us, if you asked me!

I call on conscientious Ghanaian men and women to begin a campaign that promotes decency toward the girl-child in the country, a campaign I wish to call “Restore Dignity to the Ghanaian Woman!” The nation's leaders must continually remind boys and men that girls and women are not expendable sexual objects; rather, the female population is a veritable, productive, respect-deserving component of Ghanaian society. I also call on the legislature to enact stricter laws against sexual abuse in all of its forms.

Kwasi Kyei Darkwah's alleged violation of Ewuraeffa Orleans Thompson may not be anything worse than a dalliance, or rendezvous, gone wrong, but what is undeniably true is this: a rich and powerful man saw a tall, attractive, and seemingly harmless girl and decided he wanted her, no matter the consequences. Well, the chickens have come home to roost, Kwasi Kyei Darkwah!

© Daniel K. Pryce, Ph.D., is a criminologist by profession. He may be followed on Twitter: @DanielKPryce. He invites the reader to join the pressure group “Good Governance in Ghana” on Facebook.com. “Good Governance in Ghana” is a group that emphasizes the preservation of democracy, justice, equity, and law and order in Ghana; its 372-plus members are all permitted to start discussions that promote the national interest.

CEO Of Travel Bureau Limited In Court For Stealing, Forging ...
25 minutes ago