Mr. Man Hee Lee Advances Towards A Peaceful Unification Of The Korean Peninsula And The Cessation Of Wars Around The World 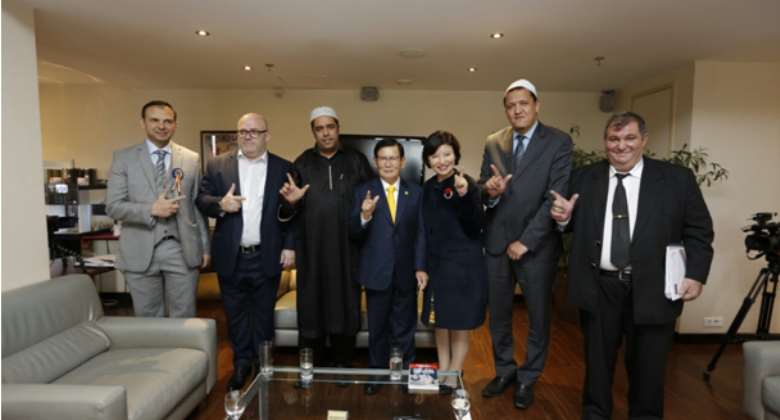 Political And Religious Leaders Exchange Ideas For Peacein Romania, A Country That Recently Celebrated The 25th Anniversary Of The Fall Of Communism. At The Pre-Inauguration Ceremony Of The Newly Elected President, Mr. Lee Addresses The Topic, “The Importance Of A Peaceful Policy For The Unification Of The Korean Peninsula”.

Mr. Man Hee Lee, a world peace advocate, the Chairman of Heavenly Culture, World Peace, Restoration of Light (HWPL), and the initiator for the cessation of a 40-year conflict in Mindanao, Philippines, along with Ms. Nam Hee Kim, the Chairwoman of the International Women's Peace Group (IWPG), recently embarked on a peace journey to Romania, a country that recently celebrated the 25th anniversary of the fall of communism, to address the topic of the peaceful unification of the Korean peninsula and cessation of wars around the world.

On the 20th, the second day, a dialogue with the youth and religious leaders took place at the Senate Hall of the Palace of the Parliament. Mr. Lee emphasized the enactment of the international law for world peace and cessation of wars and unity of religions.Following the dialogue, Mr. Lee met Romanian judicial officers, such as Judge PetreLazaroiu, one of the nine judiciaries of the Constitutional Court of Romania who hold the authority to adjudicate on the constitutionality of laws and guard the procedure for the election of the President of Romania. They discussed the roles of the legal circles in achieving world peace and cessation of wars.

Mr. Lee and Ms. Kim were invited to attend the pre-inauguration ceremony of president-elect Klaus Ionhannis on the 21st at the Senate Hall. Mr. Lee was the very first Korean to be officially invited as a distinguished guest at the ceremony. Both leaders delivered their speech concerning the peaceful unification of the Korean peninsula.

Aware of the previous national changes in Romania, Mr. Lee sought advice from the former president Emil Constantinescu and 25 other former and current presidents regarding the peaceful unification of the Korean peninsula. Mr. Lee also asked for their collaboration with HWPL, IWPG, and theInternational Peace Youth Group (IPYG)to achieve this peaceful unification as well asthe cessation of wars and world peace. These contents were aired on the Romanian national television.

During Mr. Lee's speech on “the necessity of a peaceful policy for the unification of the Korean peninsula,” he introduced HWPL as an organization that “strives for the enactment of the international law for cessation of wars across the entire world.” He added that “South and North Korea have made a cease-fire agreement due to the difference in ideologies and philosophies. To avoid this kind of situation, where a nation stands divided, we must push for an enactment of an international law that brings wars to an end.”

Mr. Lee continued, “I want to reveal that one of themany peace activities that HWPL is striving for is the very work of establishing a peaceful system in the Korean peninsula.” “A true democracy is when a government exists for the people. All citizens desire a peaceful world. Therefore, world peace is the highest feat that democracy can possibly achieve.”

Heavenly Culture World Peace Restoration of Light (HWPL) is a private and non-governmental organization (NGO) with an objective to achieve world peace and cessation of war. Under HWPL are the International Women's Peace Group (IWPG) and the International Peace Youth Group (IPYG).

During September 17 through 19, HWPL hosted the World Alliance of Religions' Peace Summit where 200,000 people participated for the cessation of wars and world peace. As for the notable figures from abroad, there were approximately 2,000 political leaders and women and youth group leaders and 700 religious leaders from 170 different nations. The highlight of the Summit was the Signing Ceremony for the Unity of Religionsthat took place on the 18th, whereMr. Man Hee Lee and Ms. Nam Hee Kim signed the Unity of Religion Agreement with world's twelve renowned religious leaders of different denominations for the cessation of wars and world peace.

Mr. Man Hee Lee, the world peace activist, and Ms. Nam Hee Kim, the women's peace activist, will continue leading the world peace movements starting from Romania where the successful results of the WARP Summit havebeen explicitly displayed. After their visit to Romania, the two leaders will return to the Republic of Korea on the 22nd. There are high hopes for their future activities as many notable figures around the world are rushing to take part in the peace activities with the two leaders.