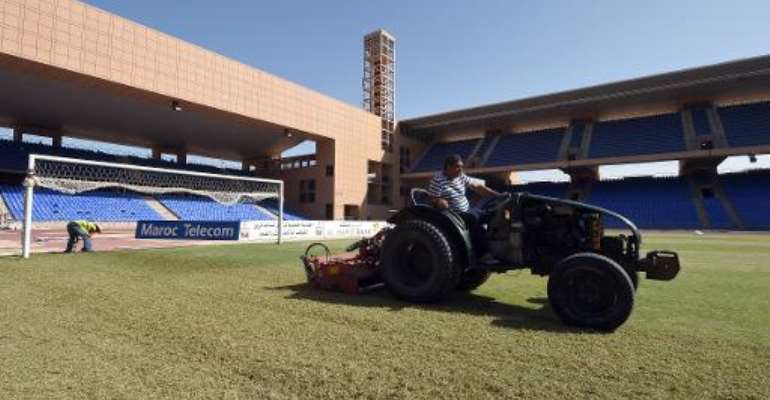 An employee cuts the grass on October 20, 2014 at the Marrakesh Stadium in the southern Moroccan city. By Fadel Senna (AFP/File)

Cairo (AFP) - Morocco has been stripped of hosting the Africa Cup of Nations and flung out of the competition after saying they wanted to postpone the tournament due to fears over the Ebola epidemic, the African Football Confederation (CAF) announced on Tuesday.

The decision was taken during a six-hour meeting of the CAF executive committee at its Cairo headquarters.

Morocco has said since early October that its call for a postponement was "dictated by health reasons of the most dangerous kind, linked to the serious risk of the spread of the deadly Ebola pandemic".

CAF called on the Moroccans to change their minds, but decided at Tuesday's meeting that the response they had been given "clearly indicates that the Royal Moroccan Football Federation reiterated its refusal to hold the competition on the dates indicated.

"Therefore, having firmly and unanimously notified on 3 November its decision to keep the competition on the dates indicated, the Executive Committee confirmed that the Orange Africa Cup of Nations 2015 will not take place in Morocco."

The CAF statement also said that other countries had indicated a willingness to host the tournament and that a decision on that would "shortly" be taken.

A senior CAF source speaking to AFP on condition of anonymity later said up to three countries, including Angola and Gabon, could be in the running to replace Morocco.

Angola hosted the event in 2010 when the Togo team were attacked by separatists, and Gabon co-hosted with Equatorial Guinea in 2012.

Among those countries which are reportedly not interested in replacing Morocco at such short notice are South Africa, Algeria, Egypt, Sudan and Ghana, while there has been no public response from reigning champions Nigeria.

The dates set for the 2015 edition of the African continent's most prestigious football tournament are from January 17-February 9.

The CAF executive committee confirmed that qualification matches for the tournament will continue as planned on November 14-15 to decide which 15 teams will join that of the new host country for the finals.

The deadly Ebola virus has killed at least 4,960 people, mainly in the West African countries of Sierra Leone, Liberia and Guinea.

Morocco fears that an influx of foreign fans could help spread the epidemic.

CAF has said the fears are exaggerated and that only a limited number of foreign fans will go there.

The Ebola epidemic first hit the Cup of Nations in August when Seychelles forfeited a qualifying tie rather than host a return match against Sierra Leone.

Apart from beng kicked out of the competition, CAF indicated in its statement that the Moroccan Football Federation could be hit by further sanctions, notably financial.

"The Organising Committee of the Orange Africa Cup of Nations will later apply the statutory provisions that are required due to a breach of the Royal Moroccan Football Federation regulatory and contractual provisions, including those set out in the Host Association Agreement signed between CAF and the Royal Moroccan Football Federation in April 2014," it said.