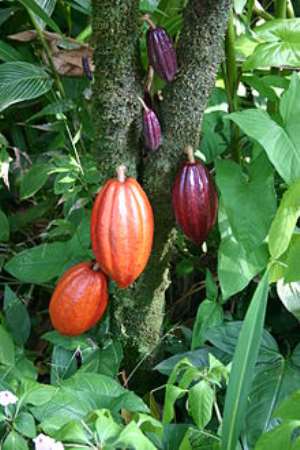 More than 32,000 cocoa farmers in West Africa are reducing the impact of pests and plant diseases on their cocoa crop thanks to a joint program led by CropLife Africa Middle East and the World Cocoa Foundation (WCF).

The program trains selected farmers to become Spray Service Providers (SSPs). SSPs are professionals who are able to help the wider farming community by identifying pests, providing advice on their management and, when needed, properly applying crop protection products on their cocoa farms.

Bama Yao Octave, from CropLife African Middle East, said the program was important to help farmers avert major crop losses, a problem that has worsened in recent years due to adverse weather which has been attributed to climate change.

“Already an estimated 30-40 percent of the cocoa crop is lost to pests and diseases every year, but the situation is now being exacerbated by hotter, more humid conditions in West Africa that favor the development of insect pests and diseases. These weaken and sometimes destroy the crop,” said Mr Octave.

Since the program began in 2013 more than 3,000 Spray Service Providers have been trained to help 32,000 farmers in four West African countries – Cameroon, Ivory Coast, Ghana and Nigeria – where 70 percent of the world's cocoa is produced.

The program is part of the WCF African Cocoa Initiative (ACI), a public-private partnership sponsored by the US Agency for International Development (USAID) and led by the World Cocoa Foundation (WCF). The initiative aims to double productivity for 100,000 cocoa farm households and raise farmer incomes by 150-200 percent by 2016.

“It is not only humans who love chocolate. It seems that pests and diseases have quite a taste for cocoa, so we are constantly in a race to protect the crop,” said Mr Ebai. “One of WCF's biggest assets is building partnerships. We needed CropLife's expertise in training people to use agro-chemicals properly so that there is minimal environmental impact at the same time as there is maximized cocoa productivity to meet increasing demand.”

Cocoa farmers participating in the program have benefited in a number of ways. For example, by reducing the amount of cocoa lost to disease, farmers have improved their incomes and are better able to afford essential healthcare and education for their children.

Ghanaian cocoa farmer Lawrence Owusu summed up the importance of the scheme to his community. “The Spray Service Provider is very, very important and very, very useful to all the cocoa farmers around. Farming has improved tremendously and people are now making a profit,” he said.

CropLife International is the voice of the global plant science industry. It champions the role of agricultural innovations in crop protection and plant biotechnology in supporting and advancing sustainable agriculture; helping farmers feed a growing population while looking after the planet; and progressing rural communities.

The World Cocoa Foundation (WCF) is an international membership foundation of more than 115 members that promotes a sustainable cocoa economy by providing cocoa farmers with the tools they need to grow more and better cocoa, market it successfully, and make greater profits. WCF's membership includes cocoa and chocolate manufacturers, processors, supply chain managers, and other companies worldwide, representing more than 80 percent of the global cocoa market.