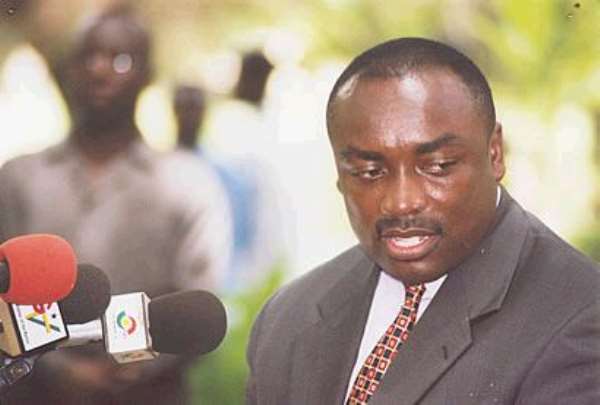 ....Meet Me At NRC Mr. Kwabena Agyepong, son of the late Justice G.A Agyepong, who was murdered together with two other high court judges and an army officer in 1982, has asked the NRC to subpoena Flt Lt Rawlings, former President of Ghana to the commission, before it brings its work to a close on July 13, 2004. He threw the challenge on June 18 on a radio discussion on Peace FM, in Accra. Agyepong said it appears to him that the former president is shying away from the issue of who was responsible for the murder of his father and the other high profile personalities, the resolution of which still remains unsatisfactory. The NRC must ask Flt Lt Rawlings to respond to my evidence before the commission”, Kwabena Agyepong insisted. Agyepong was argued to the effect that if Rawlings is not acting out of guilty conscience and avoiding the core issue of who was responsible for ordering the murder of his father and other judges, then he should speak to his petition. He dared Rawlings to meet him at the NRC before the commission ends its work, for him (Rawlings), to explain his conduct and his role, to help unravel part of the unanswered questions over the whole murder saga, instead of relying on proxies, spin doctors, special assistants and lawyers. He must be compelled to come, personality, to the commission to tell his side of the story, he stressed, emphasizing particularly, on the issue of keys to the vehicle which were collected from his Rawlings' house, for the commission of that heinous and brutal murder, he added.
Kwabena Agyepong stressed for example that he did not believe any one could just walk to the house of President Kufuor or for that matter any other head of state, pick some car keys from the dining table, and leave the house without him being aware of it and use that vehicle to go and commit an atrocious crime of the sort and no one in the house would be held responsible for it, Agyepong added.
Mr. Agyepong who is President Kufuor's press spokesman, insisted that Flt Lt. Rawlings, or his wife, Nana Konadu, must be called by the NRC to explain the circumstances under which the keys to the vehicle were collected from their home. He expressed his exasperation over what he said was a distraction and deliberate divergence from the issue of the murder. Agyepong pointed out that rather attention is being focused on the hear-say evidence of Chris Asher to the commission, and his non appearance for cross-examination. Agyepong noted that
Chris Asher was not a victim, and did not represent any evidence concerning the murder of the high court judges before the NRC which was of material importance.
“So why focus on him and his credibility as if his is the principal evidence relating to the murder of the judges, he quizzed. “This is a deliberate diversion tactics being applied by the spin doctors of Flt Lt Rawlings, and his friends, he observed.