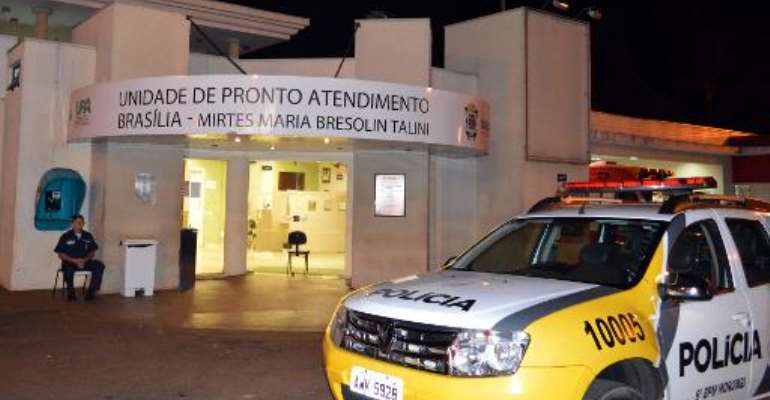 Police in Cascavel, Brazil on October 10, 2014, guard the entrance to the clinic where a Guinean patient suspected of having contracted Ebola was admitted when he had the first symptoms. By Luiz Carlos Cruz (AFP/File)

Brasília (AFP) - Brazilian health officials have quarantined a Guinean man feared to have Ebola after he checked in at a clinic with a fever following his arrival from Africa last month.

The 47-year-old man was taken in an air force plane from the southern state of Parana to the National Infectious Disease Institute in Rio de Janeiro on Friday morning after arriving at a health center in the town of Cascavel with a fever the previous afternoon.

Health Minister Arthur Chioro is due to give a press conference later Friday on the case, which would be Latin America's first Ebola victim.

The patient arrived in Brazil on September 19.

He flew from the Guinean capital Conakry to Argentina, with a layover in Morocco, then travelled overland to Brazil, according to television network Globo News, which said he was seeking refugee status.

The health ministry said that as of Thursday night, "the patient had a moderate fever and did not present hemorrhaging, vomiting or any other symptom."

But because the suspected contamination was 21 days ago -- within the incubation period for Ebola -- health officials immediately activated security plans and put him in quarantine.

The patients who were in the clinic with him have also been isolated and the site disinfected, said radio network CBN.

The symptoms of Ebola can resemble other diseases indigenous to Brazil, such as malaria and dengue fever.

Parana state has already had two Ebola alerts that turned out to be false alarms.

But this is the first time the alert has reached the level of the national health ministry, according to newspaper Folha de Sao Paulo.

Guinea, Liberia and Sierra Leone have been the countries hardest hit by the Ebola outbreak that erupted at the beginning of the year, killing nearly 4,000 people so far -- roughly half of those infected.

The disease causes fever, diarrhea, vomiting and in some cases internal and external bleeding. It is spread by contact and the exchange of bodily fluids.