Aniekan Umanah: The Poor man is Getting Tired of Defending Akpabio's Criminality 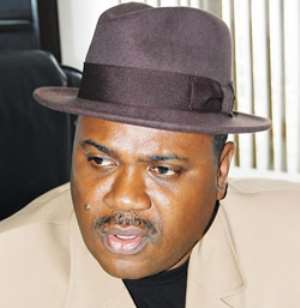 Commissioner Aniekan Umanah may not be the best Commissioner for Information Akwa Ibom State ever had. His professional weaknesses notwithstanding, I am of the opinion that the poor man is really getting tired of defending the evils committed by Godswill Akpabio against the people he is supposed to govern.

Every time Akpabio does bad things, Aniekan Umanah will be called upon to come to the social media, and other media outlets, with a mission to polish-up what appears to be a never-ending bruised image of Godswill Akpabio.

Earlier this year, when several armed men entered the office of Sunny Udom (the campaign director for Umana Okon Umana) in broad daylight in Uyo to kill him, Aniekan Umanah, without even one-half page of police report on the incident, was quick to blame everything on armed robbers.

This is exactly what Aniekan Umanah said then and now; 'It is unfortunate that a robbery incident at the office of Chief Sunny Udom has been misconstrued as an assassination attempt. It is on record that the State Security Service, SSS, has since smashed an armed robbery gang and subsequently paraded them before the Press. Arrested gang members have made confessional statements claiming responsibility for the attack on Chief Sunny Udom's office on May 6, 2014 at No. 7 Umoh Essien Street, off Obio Imo Street, Uyo.' (Source: Akwa Ibom State Press Statement, June 7, 2014.)

To Aniekan Umanah, the facts of the incident did not matter to him, even after Sunny Udom issued the following statement; "I was outside the State on Tuesday 6th May 2014 when I had a call by 2:34pm that some gunmen had raided my office in Uyo. I was highly disturbed about the mission of the gunmen because since my use of this office in the last 7 years there has not been a single incident of criminal operation in broad daylight around this neighbourhood.

On my return to the state yesterday, I noticed that the operation was something else. According to eye witnesses, the gunmen, 5 in number came into the premises and held hostage, the security man and other officials and staff including students on Industrial Training and a youth Corper at gun point, seized their phones and started ransacking the office room-to-room, breaking into toilets to look for me. The gunmen, according to eye witnesses, were well-armed some with two pistols strapped to their waist. When some of them started picking phones from my staff, one of the gunmen shouted 'is that what we came for?' and shot him; cutting off his finger. (Source: Weekly Insight Newspapers).

When Chief Paul Inyang was assassinated, Aniekan Umanah blamed it on armed robbers.

When Chief Albert Ukpanah was assassinated earlier this year, Aniekan Umanah blamed armed robbers and when he and Godswill Akpabio knew that the public did not believe the mantra, Akpabio ordered the son of Chief Ukpanah arrested for killing his father; the young man is still languishing in prison, awaiting a trial that may never come before Akpabio leaves the office on May 29, 2015.

Now Akwa Ibom people are asking why armed robbers like to attack those who are opposed to Akpabio. Aniekan Umanah wrote that shortly before he was assassinated, Chief Albert Ukpanah was in the same office with Akpabio for a discussion. This may be true. But the same scenario took place before Chief Paul Inyang was assassinated; Pau Inyang had a meeting with Akpabio a day or two before he was killed.

General Akpan had a meeting with Akpabio, within a few days, he was kidnapped.

Group Captain Samuel Ewang had a discussion with Akpabio over the phone, few days after that telephone discussion, his wife was kidnapped. (Please click here to read the story: http://saharareporters.com/2010/10/17/sam-ewang-fingers-akpabio-over-wifes-kidnap.)

In normal societies, people in positions of Aniekan Umanah would have saved their integrity by resigning from a government where the leader is always committing atrocities and then turn to his spokesperson to rescue him from all his bad behaviors, as Godswill Akpabio is doing.

Every time I read the Press Statement issued by Aniekan Umanah, I become inclined to wonder if he is convinced that there is any Akwa Ibom person who believes him. On the other hand, I cannot help to understand that the man is doing what he is paid to do; deceive the public by trying to paint a rosy image of Godswill Akpabio, whom the rest of Nigerians are beginning to understand that he is a Satan.

Say no to imposition. Akpabio must be probed!
Ikpafak Thompson Essien, Portland, Oregon