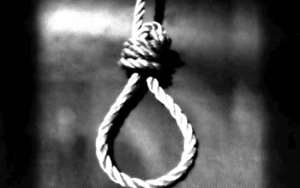 Police at Ho investigate suspected suicide case at Kable Kodzi where the decomposed body of a man was found hanging from a tree.

Police in the Volta Region have begun investigations into a suspected suicide at Kable Kodzi, suburb of Ho.

The decomposed body of the unidentified man was discovered hanging from a tree Saturday.

Flies swarm around the body of the man in his final dress - a blue shirt, a grey trouser and a canvass. He is believed to be in his early thirties, Frank Hayman, a journalist at Ho reported.

He said the police suspect the body has been there for a week.