Mormons To Take Over Ghanair 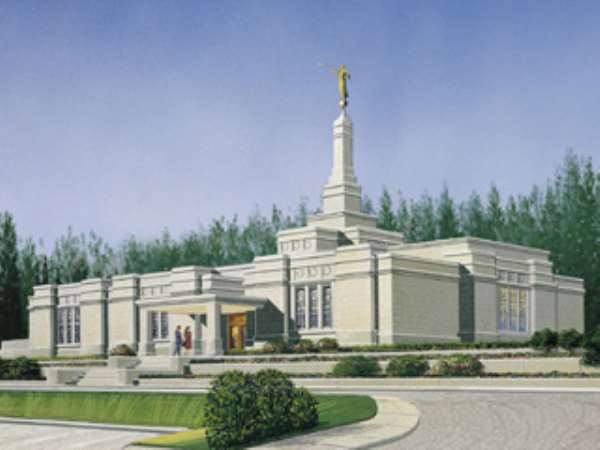 Details emerging from feelers sent out by this paper to the Osu Castle, through the Ministry of Roads and Transport and the White Avenue Offices of Ghanair in the nation's capital point to the fact that the national carrier may soon be given to the Church of Jesus Christ of Latter Day Saints and its agent.

The move which has been received with disquiet and utter resolve from several quarters to resist it to the death seems to have been hinted at in last Tuesday's issue of the state-owned Daily Graphic which carried a report that quoted President J.A. Kufour as telling a group of British businessmen during his recent visit to London that two companies, Kenya Airways-KLM-Fidelity Consortium and Ghana International airlines have been short-listed for a possible joint venture deal over Ghanair.

Investigations carried out by newsmen which started before the hint from the President have revealed a Mormon connection as thick as the thigh of the elephant behind the whole bid for joint venture partnership for Ghanair, which involves the two companies based in Utah in the United States of America where the headquarters of the Church of Jesus Christ of Latter day Saints is also located.

Further information gathered about the Mormon link has it that Chairman of the Ghanair board, Dr. E.R.K. Dwemoh himself is a Mormon (we could not verify this as went to press). Insiders who have seen the proposals by Ghana International Airlines told newsmen that the two Utah firms are the only ones named in the proposals for Ghana Airways by Ghana International Airlines.

Interestingly, the report in the Daily Graphic shied away from stating who is behind Ghana International Airlines apart from a terse note that it is owned by an American investor.

Roads and Transport Minister, Dr Richard Anane is on record as saying that KLM was not interested in any joint venture for Ghanair and it is not known at what stage they re-entered the fray to have been short-listed. Insiders say if there is no truth in the assertion by President Kufour as to the short-listing of KLM alongside its partners, then it means that the whole process is being cooked for the Mormons through Ghana International Airlines.

Checks on Sky West show that it has a fleet of 74 Embraer-120 turboprops and 114 Canadair Regional jets and provides approximately 1,200 daily flights to 106 cities in 28 states in the United States and Canada. The sang however is that its aircraft are 50 and 30 seater respectively. The Canadair Regional Jet 200 LR can accommodate only 50 passengers whilst the Brasillia EMB-120 can take up to 30 passengers.