Has President Jonathan Paid His Dues? 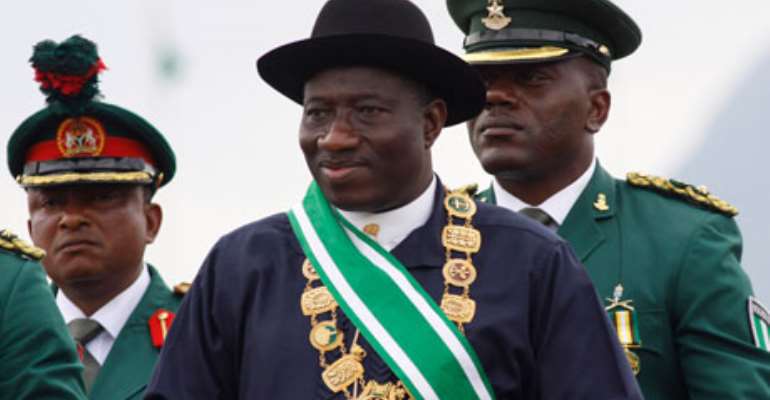 May 29th has gradually crept into the consciousness of public officials as the democracy day even with the cacophony of protests by some die hard supporters of June 12th to be declared the official democracy day. June 12th 1993 general elections conducted by the then military president General Ibrahim Badamasi Babangida which was won by the late Chief Moshood Abiola was criminally annulled by that dictatorial regime. Most pro-democracy campaigners say June 12th rather than May 29th is the rightful democracy day. That is a topic of debate for another day.

In line with the thinking of the Peoples Democratic Party -led Federal administration and other state government officials from the other parties namely All Progressives Congress and All Progressives Grand Alliance, this year's democracy day was marked although not with pump and pageantry given the precarious security situation foisted on Nigerians by the armed Islamic Insurgents with epicenter in the North Eastern Nigerian States of Borno, Adamawa and Yobe.

However, President Jonathan read a speech in a nationwide broadcast in which he highlighted some of his salient achievements since coming into office about three years now. He particularly said his administration has demonstrably reshaped the economy of Nigeria for the better but regretted that the targeted bombing campaign by the armed insurgents has undermined the gains of the reforms that his government is systematically implementing in all facets of our national life but also called on Nigerians to support his administration to defeat terrorism in no distant time.

On their part, the notable political opposition elements expressed the view that the Federal Government has failed because the security and wellbeing of Nigerians and their hard earned property are undermined by the activities of the violent Islamic terrorists who began waging the series of atrocious bloody attacks since 2009. Undeterred by the deluge of attacks in the media by the political opposition, the Federal Government still used the opportunity of the May 29th democracy day celebration to reel out what it considers as the landmark achievements of the President Jonathan's administration.

In the nationwide broadcast the President congratulated Nigerians for their resilience in collectively working to sustain democracy in the last fifteen years and asserted that the May 29th 1999 hand over by the military to the civilians was the real emergence of the "government of the people, by the people, for the people.'

There is however a considerable quantum of voices saying that the fundamental freedoms for which democracy is signposted are still work in progress in Nigeria given that the police and some operatives of the armed security agencies have consistently given a deaf ear to the constitutional obligations to respect the fundamental rights provisions enshrined in chapter four of the constitution of the Federal Republic of Nigeria of 1999 [as amended].

In that speech which is arguably his most lengthy of all his presidential speeches, President Jonathan also encapsulated the total package of his administration's counter insurgency war including but not limited to his avowed commitment to grant conditional amnesty to members of the dreaded boko haram insurgency group who have renounced violence and showed evidence of their non-involvement in the spate of killings which have resulted in over 12, 000 casualties since 2009. Most Nigerians who believe in the rule of law say only members of the armed insurgency with no blood in their hands should be granted conditional amnesty upon repentance and for the government to reintegrate them into the larger society.

Interspersing that speech with what he considers his landmark scorecard in the core economic sectors, President Jonathan said; "On my watch, we have witnessed high national economic growth rates, steady improvements and expansion of national infrastructure including airports and roads, the restoration of rail transportation, the efficient implementation of a roadmap for improved power supply, a revolutionary approach to agricultural production, as well as advances in education, sports, youth development, healthcare delivery, housing, water supply and other social services".

Not done yet with reeling out his achievements which are however debatable, he asserted that in the oil and gas sector, his regime's promotion of a sustainable local content policy, continues to guarantee equity and better opportunities for Nigerian entrepreneurs and skilled personnel. But Nigerians are complaining loud and clear that most people still buy petroleum products at cut throat pump price despite the claims by the Nigerian National Petroleum Corporation of spending over N1 Trillion on the so-called subsidy payment which is widely marred by outright theft and economic crime by the government's accredited fuel importers. Now there is this clamour in some government circles both in the states and the federal level that fuel subsidy be removed to subject ordinary Nigerians to excruciating pains just for the selfish reasons of the Nigerian Governors forum's ambition to convert much of these subsidy funds to their campaign funds in the next election.

Still talking about the economy and what his administration has achieved so far, the Nigerian leader made allusions to the fact that Significant increase in mobile telephone and national broadband penetration has been achieved which according to his estimation has made Information and Communications Technology (ICT) one of the fastest growing sectors of the Nigerian economy.

While not denying the above claim, one thing is also clear which escaped the memory of Mr. President in this current democracy speech and that is precisely that the telecommunication services' providers have continued to exploit Nigerians through fraudulent deductions and service charges even as the Nigerian Communications Commission looks on as these consumer rights' breaches are committed with reckless abandon by these telecom service providers most of whom are foreigners who simply cash in on the poor regulatory framework to engage in capital flight.

None of these telecommunications firms that earn billions of Naira from millions of their exploited and dissatisfied customers have even taken their companies to be quoted on the Lagos stock exchange nor do they care to introduce local contents into the running of their profitable firms and to cap it up most of their Nigerian staff were recently offloaded and rendered jobless even as the federal ministry of labour and productivity watches without positively intervening to stop this apparent slave labour practices.

So the President's claim that his government has also developed strong financial markets and regulatory institutions is not holistically accurate as he may have been misinformed since even the smallest elementary one pupil knows that most telecom service providers commit horrendous human rights violations and are going scot-free. Not long ago when the NCC woke up a bit from regulatory hibernation and slammed some range of financial sanctions on some defaulting telecom service providers, the same government regulatory agency ordered that the proceeds from the fines be paid into federal government coffers so the victimized telecom service customers are now left in the lurch without compensation for these serial inefficiency and notorious drop calls. What NCC has done symbolically is to encourage these defaulting firms to keep abusing the consumer rights of their customers/subscribers since government would generate revenue from these criminal act of negligence and exploitation of ordinary Nigerians most of whom are voiceless.

The question of if Jonathan has paid his dues or not will require considerable amount of patience to arrive at an objective conclusion and the final verdict will come when the February 14th lovers' day Presidential election's results are received next year. That is if INEC will be truly independent and conduct free and fair polls.