Imo 2015:What Right-Based Agenda From PDP? 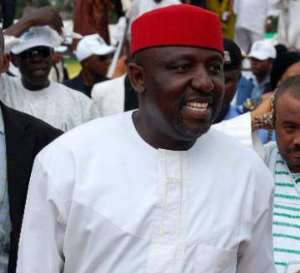 Imo state is obviously one of the flashpoints of the coming election going by the fact that the incumbent governor Mr Rochas AnayoChukwu Okorocha is one of the frontline leaders of the new opposition collectives known as the All Progressives Congress [APC].

Although Mr Okorocha won on the platform of the pro-Igbo political party-All Progressives Grand Alliance [APGA] he cross carpeted just after a year as the governor of Imo state and joined forces with other opposition elements to set up the newly recognized All Progressives Congress. The treacherous act of leaving ones political party that sponsored the office holder to join another platform is an atrocious and dastardly undemocratic tendency that has become notorious in Imo state going by the fact that the current holder of the office of governor of Imo state followed the bad tradition as was practiced by his predecessor-Ikedi Ohakim who also abandoned the party that brought him into office to join the ruling national party-Peoples Democratic Party [PDP].

In Britain not too long ago a member of the British Parliament who dumped the conservative party to join the rave of the moment-UKIP-an ultra conservative political platform with anti immigration tendencies., was compelled to loose his seat whereupon a by-election was conducted to fill that vacancy created by that movement.

But in Nigeria whereby the British colonized us and from which we secured political independence the opposite is the case because politicians lack the moral contents to respect the law of contract by quitting whenever they are dissatisfied with their original party that brought them into office. Imo state is a very highly sophisticated place and the expectation is that a lot of the voters should rightly punish Rochas Okorocha for abandoning ship and chasing after another political party that never brought him into office. Whether this will happen or not will be known pretty soon.

But last week a major political event took place in the nation's capital with far -reaching implication for the Imo state electorate come 2015. This landmark political event was the picking up of nomination form to run for the party primaries to try to become the official candidate of the national party by the Deputy Speaker of Nigeria's House of Representatives Mr Emeka Ihedioha. Emeka Ihedioha is one key political heavyweight in the South East that has never abandoned his political platform since joining politics in 1999and so a lot of people see him as a morally stable person and someone who is organized and has reputation for keeping to his solemn promises.

Remarkably, the deputy Speaker who has carved a niche for himself as one of the fathers of constitutional democracy going by the frontline roles he has consistently played in the on-going constitutional amendment process, was accompanied to the Wadata Plaza head secretariat of the national party in Abuja by many young and upwardly mobile patriotic Imo state indigenes who have strong passion and desire for that state to be governed by a chief servant who would have the comprehensive interest of it at heart and not someone who thinks and behaves like a typical roadside trader.

Imo state in the last 12 years has unfortunately witnessed phenomenal decline because those who have won and held office as state governor did fail to implement rights-based agenda for the transformation of that state into an industrialised place. Over 40 years since after the statesman late Chief Samuel Onunaka Mbakwe left as governor of the old Imo state nothing of significance is on ground to show that the contemporary political leaders care about leaving tangible legacies whenever they get the opportunity to serve as the governor. The wonderful pragmatic leadership scripts of excellent service to the state left by Chief Mbakwe is yet to be matched.

While objective observers have yet to conclusively written off the incumbent because of the fact that poverty and rural underdevelopment are still huge developmental challenges for millions of Imo state indigenes the national ruling party appears focused to give the APC in Imo state a fight for their money. This is because the APC is seen widely as a pro-North contraption with no genuine Igbo interest at heart.

And so at that epoch making event, Deputy National Chairman of the Peoples Democratic Party (PDP), Prince Uche Secondus declared that the party is proud of and happy with Deputy Speaker, House of Representatives, Hon. Emeka Ihedioha for his loyalty and service to the party and for supporting President Goodluck Jonathan.

Speaking when the deputy speaker visited the his office after collecting his expression of interest form for the governorship of Imo State, Prince Secondus congratulated Hon. Ihedioha for seeking to transit from the legislature to the executive arm of government in his political career.

He promised that with aspirants like Ihedioha, the PDP will have to put its best foot forward, promising that the party would conduct free and fair primaries to ensure a level-playing field for all contestants.

“For us in the national working committee, we will provide a level playing field for all aspirants, we will conduct very transparent primaries that will show that PDP is the best in terms of internal democracy and by the time we come out of that primaries, our candidates will be unbeatable in all the elections.

“On behalf of the National Chairman and Members of the Working Committee, we wish you well and we want to congratulate all your supporters; we ask that the most important thing is that we must maintain peace, we must be our brother's keeper even back home in the state so that this process can come and go for us to start the campaign for the general elections.”

Noting that he had paid his dues having occupied different political positions, he assured that he would emerge victorious in the guber primaries and subsequently chase the APC government out of the Government House

He said: "APC Government of Imo state has failed Imo people. Governor Rochas will leave the seat worse than he met it. I am seeking for the position of Governor to correct the ills of APC government".

In a chat with journalists shortly after picking the form, he noted that the APC government in the state was a disaster stressing his determination to rescue Imo from the hands of the bad regime represented by Governor Rochas Okorocha He stressed that PDP would emerge victorious in Imo and at the federal level.

Already the stepping out of Emeka Ihedioha into the governorship fray in Imo state has received rave reviews even as most Imo state indigenes have taken notice and are already sending out what they considered as the best Rights based agenda for Imo state and especially for the ruling national party which appeared prepared to field the most capable and qualitative candidate to stand for the 2015 election. Imo state people are waiting to hear from Ihedioha and other candidates how they intend to transform Imo state into an industrialised and developed economy with less social crime and more jobs for the youth. The ball is in the courts of Emeka Ihedioha and all others to show Imo their rights-based agenda for Imo state.

Imo state needs to become a developmental and manufacturing hub of the South East so investors can be attracted to set up their firms and that would create the needed friendly environment for job creation for the hundreds of thousands of young school leavers and graduates who are idling away and most of them are falling into the traps of human traffickers to try to seek greener pastures overseas at great risks to their lives.

The political elite seeking for offices from Imo state people must demonstrate more than mere paper agenda but must show concrete evidence of what they have done and are prepared to do if elected to make Imo state a friendly home for all indigenes and an attractive destination for investors from both within and without the country.