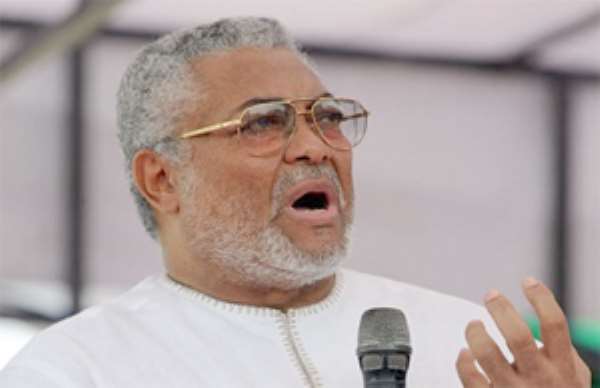 A former Ghanaian leader, Jerry John Rawlings, has highlighted growing economic hardship in Ghana in a recent interview with The Vanguard, a Nigerian newspaper.

'In my country in 1979, there was no food in the market, things were very terrible. But today there is food in the market but people cannot afford it,' Rawlings said, echoing a recent wave of public agitations, after a string of tax increases and utility price enhancements prompted food price hikes.

The comments by the Founder of the ruling National Democratic Congress came weeks after the Ghana Statistical Service released fresh findings which show a sharp rise in inflation figures.

The figures also showed that between March 2013 and March 2014, Ghana's year-on-year Producer Price Inflation (PPI) increased by 27.8%, representing an increase in PPI by 0.7% points, compared to the 27.1% rate recorded in February 2014.

Also, consumer prices, according to the GSS, accelerated for the seventh consecutive month, in what experts have called the highest inflation rate since February of 2010.

Ghana's economy has been badly hit by a surge in foreign exchange rates, with the national currency, the cedi, losing strength against major currencies like the US dollar and the British Pound.

Although the Bank of Ghana introduced sweeping monetary measures some three months ago in a desperate bid to arrest the free-fall of the cedi, fresh reports say the cedi continues to fall daily - a development that continues to fuel price increases locally.

Over the Weekend, Jerry Rawlings, waded somewhat into ongoing public discussion about growing economic hardship in Ghana when he suggested that food prices are moving out of the reach of many Ghanaians.

'We cannot afford this high cost of living with the current wages and salaries,' Kofi Asamoah, Secretary-General of the Trades Union Congress (TUC), said on Saturday. 'We want all negotiations on the minimum wage and the base pay must finish before the May Day. We are sending a strong signal out there'.

Mr. Asamoah's comments drew a thunderous applause from a multitude of workers who gathered in Tema, Ghana's industrial capital, over the weekend.

'Let us first see ourselves as workers,' the TUC boss told the meeting, which was organised by the Tema District Council of Labour as part of activities marking this year's May Day, which will be celebrated nationwide on May 1, 2014.

AFAG threatens street protests
Last week, pressure group, Alliance for Accountable Governance (AFAG), issued a statement in which it threatened fresh street protests after plans to introduce a new VAT policy that is set to hit banks in Ghana.

'…We will hit the street to show to government that Ghanaians are discontent with the NDC government's economic management,' said AFAG -- a group notorious for previous street protests over what it called 'harsh' social and economic conditions in Ghana.

'AFAG will use all legitimate means to resist the implementation of this bank service tax. It is certainly not popular,' Thursday's statement said. 'Ghana's economy is in a failed state. We feel very sorry for President John Mahama for supervising this mess. It is however not surprising to Ghanaians to see President Mahama, his extended family and cronies getting better off, as Ghanaians continue to wallow in abject poverty'.

In February this year, President John Dramani Mahama downplayed the extent of the economic challenges facing Ghana when he said, '…despite the short-term challenges we face our economic fundamentals remain sound and our midterm goals are bright.'

He told Parliament that Ghana's economic prospects are 'bright'. 'Growth continues to be robust at an estimated 7.4 percent last year and we still retain our vision to accelerate and maintain GDP growth at above 8 percent going forward,' he said.

Speaking to The Vanguard newspaper, Rawlings pleaded that as Africa's most populous nation, Nigeria must not allow the International community to meddle wither her internal affairs due to the prevailing insecurity.

In the former Ghana Air Force pilot's view, the war on terror would be won if all Nigerians work in unity.

Rawlings, who expressed regrets at the worsening security situation in the oil-rich former British colony, said Nigerian authorities must resist the temptation of seeking the assistance of foreign powers in solving its problems.

'Nigeria's political might is about 35 per cent in Africa and that is why Nigeria must show the way in leading Africa,' Rawlings said. 'The way the world is going, Nigeria must not suffer vulnerability or others will take advantage of the problem'.

Rawlings, till date Ghana's longest serving leader, first came to power through a bloody military coup by junior officers of the Ghana Armed Forces in June 1979.

He is on recorded as having variously defended the coup -- which later saw the execution of eight senior military officers, including three previous Heads of State -- as a necessary evil triggered by widespread corruption among the ruling class, as well as severe economic hardship in the former British Colony in the 1970s.

In 1983, Mr. Rawlings briefly handed over power to Dr. Hilla Limann, a man elected by popular elections that year. Some two years later, Rawlings returned to power after overthrowing Dr. Limann through a bloodless coup.

In 1993, Rawlings became the first President of Ghana's Fourth Republic after democratic elections. He went on to win re-election in 1996. In January 2001, Rawlings stepped down as President in line with Ghana's constitution after two terms in office.