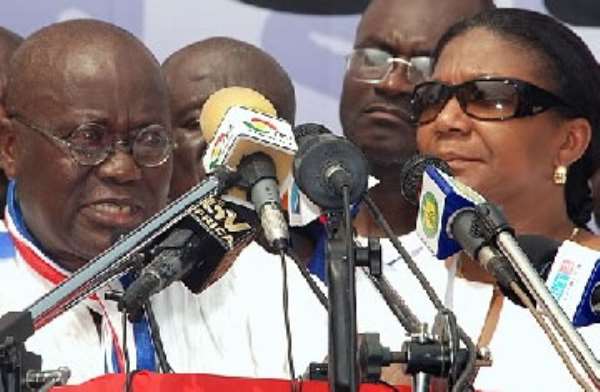 Even while vacationing in London for 6 months—allegedly seeking the face of God to tell him his future political direction—the NPP's Akufo-Addo did not detach himself from Ghanaian politics or the NPP's “book politics”. He said and did a lot to prove that he couldn't do without partisan politics.

And when he returned to Ghana, he quickly indulged in acts that confirmed the impression that he won't yield the flagbearer slot to anybody. He gamboled about, visiting Kumasi in the style of a head of state, relishing the open adulation given him, and declaring his intention after hob-nobbing with personalities that he interacted with.

Before the Tamale conference, he was really bubbling with everything to prove that he was the be-it-all-and-end-it-all for the NPP. Apparently, his henchmen in charge of the NPP had already declared him the de-facto flagbearer to boost his political posturing.

That was the gusto with which he entered Tamale for the national delegates' conference—and he held himself up as such. No challenger!!

Come April 13 when the results showed that his henchmen had been jettisoned, the ominous suddenly took over. The Akufo-Addo camp knows the element of which Paul Afoko (NPP National Chairman) and Kwabena Agyepong (General Secretary) are made. Halt!!

Afoko might have openly declared his neutrality, but that alone is not enough to restore the air of “a done deal” to the Akufo-Addo camp. There is much about Afoko to haunt that camp. Kwabena Agyepong too has enough to scare that camp. So is it for the other 8 national officers , each nursing his or her own sentiments. It is all about human nature.

There is much at stake now in the NPP for Akufo-Addo to be scared of. Suddenly, tongues have begun wagging in demand for a “fresh blood” and many other expectations that fall outside Akufo-Addo's scope.

Well, if you doubt it, just read this opinion piece (http://www.ghanaweb.com/GhanaHomePage/NewsArchive/artikel.php?ID=306854) by one of their own (Katakyie Kwame Opoku Agyemang, Asante Bekwai-Asakyiri) to judge things for yourself:

A careful reading of this opinion piece should tell Akufo-Addo what lies in store for him. These are hard facts to be accepted, digested, and used to appraise Akufo-Addo's political manouevres. They paint the true picture of him that explains why he couldn't appeal to voters at Elections 2008 and 2012 and which will likely work against him again if chosen for Election 2016.

Although portrayed as the most popular, he can't escape what is building up to torment him. Three main factors accentuate the fate awaiting him: qualms about his personal leadership style; the age factor; lack of appeal to floating voters (for whatever reason); the deepening gulf between his camp and others in the party; personality traits; the call for a younger candidate to move the NPP forward; and many more.

Those howling themselves lame with the slogan “No Nana No Vote” are only adding more fuel to the fire that will burn them all if their interests worsen the party's plight.

Perhaps, the sudden silence from the Akufo-Addo camp is just an inkling of what lies ahead. Has fear already gripped that camp? In many cases, epiphany can be traumatizing, even if it leads to reformation for a good cause.

I have heard one of those loud-mouthed NPP members say the other day that the current situation in the country have already secured victory for the NPP at Election 2016. I laughed him to scorn.

It is not automatic that the failures of the Mahama-led administration will endear Akufo-Addo to the hearts of voters. I am reminded of Dr. Konadu Apraku's call for a candidate who can APPEAL to the voters (mostly the undecided floating voters) and his conclusion that Akufo-Addo isn't that candidate.

To worsen the situation for him, his henchmen are not learning any lesson to improve their politicking. They have chosen to undermine Alan Kyerematen, as Mustapha Hamid did the other day, telling Alan to stand as an independent candidate if he feels he is that much popular. Apparently, the justification for such an unguarded utterance is that Akufo-Addo already has the flagbearer slot for Election 2016.

But the post-Tamale goings-on don't persuade me that Akufo-Addo is the de-facto flagbearer. The under-currents after that conference are really strong. Thus, any misguided strategy that the followers of Akufo-Addo adopt to privilege him (such as the persistent bad-mouthing of Kyerematen) will only worsen the situation, which explains why the Akufo-Addo camp needs to tread cautiously.

Cries for Northerners to take the NPP back add more to the uncertainties. So also will it be for any Kyerematen-Apraku collaboration against Akufo-Addo's interests, especially if one adds the fallouts from the factionalism tearing the party apart.

Of course, talk of an Akyem Mafia may be dismissed but the Ashanti enclave (long seen as opposed to Akufo-Addo and likely to be given shape by Kyerematen and Apraku) is likely to sympathize with a Kyerematen-Apraku alliance.

Or, plain sabotage may be used to doom Akufo-Addo. It may be in the form of adroit campaigns against him or a calculated apathy on voting day. After all, we heard about such steps at Elections 2008 and 2012, which some adduced as the reason for Akufo-Addo's electoral loss. At 2016, such anti-Akufo-Addo moves may be made, especially if arm-twisting earns him the slot. Who knows? In the internal politics of such parties, anything is possible.

Putting everything together, then, we can't fail to notice why the Akufo-Addo camp is now not as rambunctious as it had been before the Tamale conference.