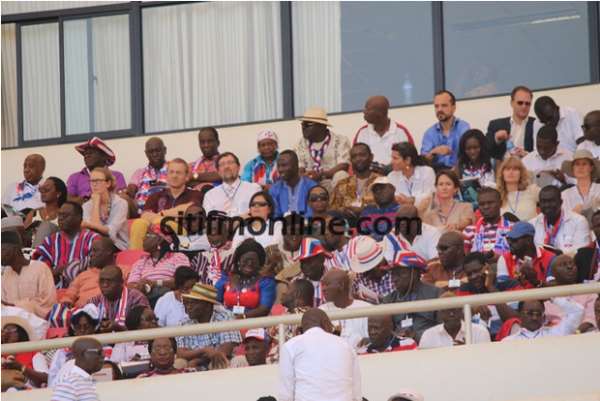 The much touted National Delegates Conference of the New Patriotic Party(NPP) has kick started after hours of delay.

The event which was supposed to begin at 9:00am started around 12 noon.

The conference began with a prayer by the Chief Imam followed by a cultural display by the Kokomba dancing group.

First, the Tamale Regional Chairman of the NPP, Bugri Naabu delivered a short address in which he mentioned that the party is determined to win power in 2016 and charged Nana Akufo-Addo and his counterpart, Dr Mahamudu Bawumia to deliver victory for the NPP.

Minority Leader, Osei Kyei Mensah Bonsu took his turn to address the delegates. He challenged the party to try and increase its numbers in Parliament while working towards wining power in 2016 to save Ghanaians from hardships.

He also warned against the politics of insults that is destroying the party saying, “people do not address issues but only attack personalities who offer themselves to serve the party.”

He again called on members to win over more floating voters for the party by their utterances and work.

“Are we making the party attractive to the neutrals and floating voters?” he asked.

The National Treasurer of the party, Esther Ofori gave the financial account of the party followed by the party's chairman, Jake Obetsebi Lamptey who also gave an account for his four-year stewardship as the National Chairman of the party.

He said it is by divine intervention that the NPP has gathered in Tamale for another Conference saying, “today, the NPP is back in Tamale to elect new executives under the theme “Our Roots, Our Strength, Our Future.”

Some political parties were also present to fratenise. The NDC's General Secretary, Johnson Asiedu Nketia led a team of political party reps to give their solidarity messages to the NPP.

He admonished the delegates to be peaceful in the dealings.

Also PNC's General Secretary, Bernard Mornah said the PNC will present a formidable force in 2016 and calls on the NPP to support it when the time comes as it did for the NPP in 2000. He said the PNC is waiting to work with all executives who will be elected.

The two time flagbearer of the (NPP), Nana Akufo-Addo has arrived at the Stadium with Dr. Mahamadu Bawumia, as well as the wife of the late former Vice President, Ahaji Alui Mahama.

Northern Regional Police Public Relations Officer, ASP Ebenezer Tetteh has reassured all attending the delegates conference of maximum security and warned that the police will not spare miscreants.

He was contrbuting to Citi FM's special edition of The Big Issue at the Tamale Sports Stadium on Saturday.

''Investigations are ongoing; we are advising the people to volunteer information for the arrest of the miscreants who were involved in the shooting incident that lead to the injury of some nine persons,'' he said.

Unknown gunmen opened fire into a crowd of NPP supporters who were entertaining themselves at a night jam organized on Thursday night as part of activities marking the mammoth delegates conference.

According to him, adequate police personnel have have been dotted all over the Tamale metropolis coupled with maximum security patrols within and outside the metropolis.

ASP Ebenezer Tetteh further said the police will form a human chain during and after the voting exercise to ensure a free, fair and transparent polls.

He cautioned everybody to stay off, “anybody who tries to test the pulse of the police, will be dealt with''.

Meanwhile, the Electoral Commission has concluded arrangements on the ground awaiting the start of the programme.