Epiphany: Please Take A Look At This Picture 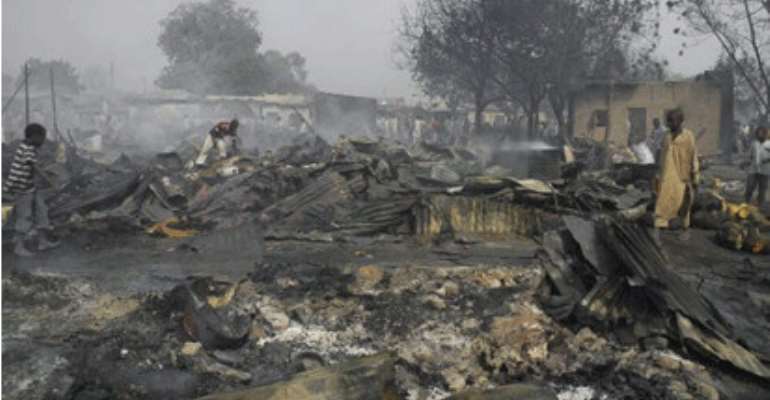 Kindly allow me to explain this simple picture.
It looks almost like an ordinary picture nowadays. It perhaps does not strike much in our desensitized minds. Take another look. What do you see?

My brother (late) was once asked by the New York Times to describe his experience as the only consultant treating HIV in a nine-county area of the Mississippi Delta region of America. This was in the early days of the virus when there were few specialists. There was something peculiar he said

“Dr. Brimah hears from his patients that H.I.V. is often the least of their worries. ''There are issues,'' he said, ''of looking after children, trying to get insurance, the lack of a father in the home, alcohol, drugs. They have so much going on.”

I could not understand and relate to how this could be in America; that was until Katrina when the poverty of the Mississippi Delta region was exposed to the world.

Take a look at the picture. What do you see?
The picture shows two boys. Did you notice them? Now look closer at them. One, the one on the left has no shoes. He has no shoes. That little boy is barefoot in the ash of the burned buildings.

I am not sure of the boy on the right, perhaps he is likewise.

Now look at their clothes. They are haggard. In that picture, I see abject poverty. These are not beggars. These are children of Nigeria.

Or perhaps it is not their home, but they are looking all the same for something of value in the debris.

Think about the lives of those boys; think about their hopes. Think about the opportunities they had, the gifts of Nigeria they never partook of or ever hoped to enjoy; and now they have gone from little to none. The homes I have seen in all the burned images, huts, mud buildings with thatched roofs. This has zinc roofs. These houses, are they in Nigeria? I never knew of this poverty. Of the millions in rural areas we have so abandoned.

What do we do for them? How do we strive, fight for them to have a better life? Or do we just drive our cars, text on our phones and believe their rights are not our fight, despite God blessing us with knowledge, power, youth, technology and spare time to spend watching Man U and Arsenal European games of men kicking leather balls?

Are we preoccupied with getting cars, perhaps private jets by looting the nation, leaving these boys to such a life?

What did those boys do to merit this treatment with guns and anger from our activities and our generation?

This picture is from Vanguard; I believe from one of the recent episodes of 'unknown gunmen' massacres, Zamfara 250 perhaps. The ones in which the culprits never get caught, thanks to our security department being depleted –by the politicians in power—of all resources and not having the modern equipment necessary to counter the crime –the politicians in power arm and create.

This is what our nation is. As though the lack was not enough, the chronic corruption has now caused intractable terror. The politicians have made the youth, the herdsmen, the farmers, wild and now they are killing the poor who gained nothing from Nigeria and partook naught in the plundering of Nigeria. The poor who simply minded their business, who unlike some of us even, did not criticize the government. What is their crime, other than being Nigerians?

In that picture, I see the truth. I see the pain. I see darkness. I see the crime and the sin. And most painful of all to me, I see my lack of empathy, my cowardice and my ungratefulness and my failure.

We Youth have the power to correct this. We have the numbers to overturn this shame that our nation has become. We have the capacity to easily revolt and stop this madness and fight the wicked.

It is time for our independence from the plundering, wicked Cabal. The over recycled vestiges of colonialism that have remained, dead roots, with no leaves, twigs or fruit to offer, desperately stuck in the corridors of power.

Form your revolution at your location. Own your revolution. Collaborate. Join the revolution: http://NigerianMassesRevolution.com We must declare our independence this year. It has been one-year-too-many. A handful of Cabal must no longer hold the millions of us down.

It is the God demanded duty of every nation to provide for its weakest; else God punishes such nations that abandon their most vulnerable with the terror and curse we now experience.

Our great men and women of the past, Mrs. Fumilayo Kuti, Enahoro, were told that it would not work. They were young like us. They were challenged with worse than us. There was no global human rights then, no media, yet they stood up to the colonial masters and demanded freedom, the freedom we got.

They have done enough harm. It is time for a new attempt to re-found and re-forge this great land and redirect the course of this great nation and the great nations that make its many parts. Let us declare our second independence this October 1st.

Nigeria Must Be Free! Nigeria Will Be Free!

http://ENDS.ng [Every Nigerian Do Something]