The Wages Of Greed 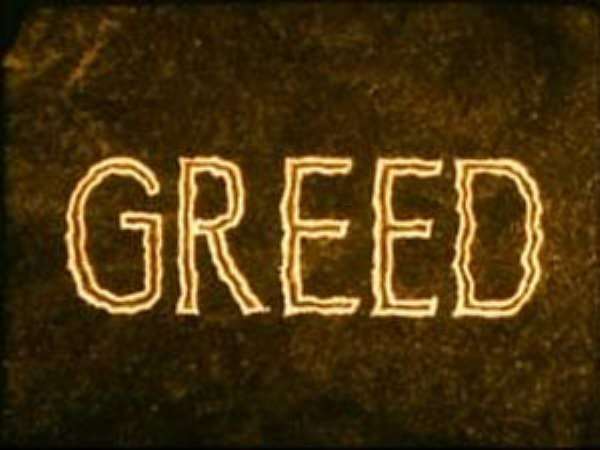 Greed among politicians whose party is in power has assumed a heartrending dimension. It is more pronounced among those holding government appointments: they are ready to move anything to win state contracts. Those who stand in their way are surely going to suffer telling consequences for their bravado or more appropriately foolhardiness.

With state resources at their beck and call they have an unrestrained versatility much to the disadvantage of their competitors who are the old guard contractors and suppliers of logistics to state institutions. Woe to contractors who are perceived to belong to the other side of the political divide in this race for juicy state contracts. They stand the risk of not only being denied payment for the already executed contracts but no longer considered for future jobs. That is a fact.

Many contractors and businessmen are whingeing over the usurpation of their occupation by greedy politicians, aberration which has set them on collision course with their bankers from whom they collected loans.

Unable to service these loans, interests on which continue to accrue, some of these contractors have developed health challenges; conditions occasioned by perpetual stress and apprehension of impending humiliation over their indebtedness to financial institutions. While many of these contractors are yet to be paid for the already executed projects the new breed politicians/contractors receive their cheques with little or no ado.

These are the realities of the times and it hurts to observe such absurdities in a country we all seek to nurture on democratic principles, and in which discrimination on political lines should not be entertained under any circumstances.

When politicians use their influences to win contracts in various forms such as construction and supplying of materials their compatriots who have been engaged in such occupations over the years are compelled to rethink their positions.

Such rethink is informed by a wanton usurpation of what is their occupation in which they have invested so much and garnered adequate experience over decades as citizens of this country.

Unable to match the muscle of politicians who have become contractors overnight and supplying cement blocks to major state construction projects all they can do is throw their hands into the sky, whinge and pray for a way out of the predicament they have found themselves in.

Businesses are collapsing and the mood of many who have been benefitting from the trickle-down effects of what the distressed contractors and businessmen were getting previously is melancholy.

The wages of greed is the state in which Ghana is mired today with her citizens close to the precipice.