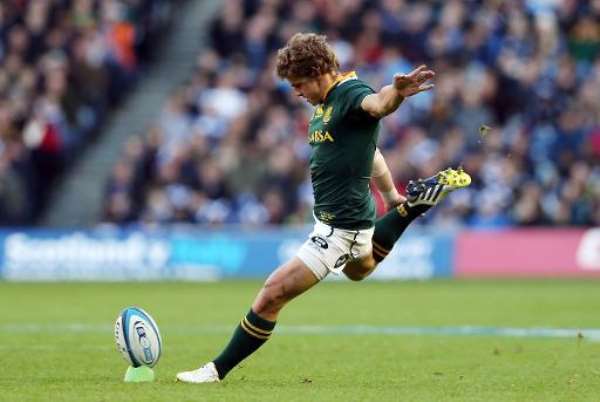 Fly-half Lambie dotted down on 83 minutes after sustained pressure as the home side made a perfect start under new coach Jake White.

A 2007 World Cup winner as coach of the Springboks, White moved to Durban after guiding the Australian ACT Brumbies to the final last year.

And many pundits are predicting the 'special one' of rugby union could go a step further this season and steer three-time runners-up Sharks to glory.

Bulls, with 36-year-old lock Victor Matfield coming on in the second half after more than two years in the competitive cold, got within 10 points eight minutes from time.

But they could not get the score that could have given them a bonus point and the late sin-binning of left-wing Bjorn Basson was followed by the Lambie try.

Matfield, a 110-cap Springboks icon, flopped as a TV analyst and succeeded as a Bulls assistant coach since retiring after a 2011 World Cup quarter-finals loss to Australia.

His second-half entry was in line with Bulls' claim that he will be used "sparingly", and needs more game time before a fair assessment can be made.

Success before a large, appreciative crowd at Kings Park in Indian Ocean city Durban took the Sharks to the top of the South African conference with five points.

Golden Lions, shock 21-20 winners over Central Cheetahs in Bloemfontein earlier Saturday, have four, Cheetahs one and inactive Western Stormers and Bulls none.

Lambie, desperate for a good season after slipping far behind Morne Steyn in the fly-half ratings of Springboks coach Heyneke Meyer, opened the scoring on four minutes with a penalty.

Left-wing Lwazi Mvovo ripped Bulls' defence apart to send centre Paul Jordaan over and Lambie converted only for a Fouche penalty to narrow the gap to two points midway through the half.

Scrum-half Cobus Reinach claimed the second try when opposite number Francois Hougaard was dispossessed, then Lambie and Fouche exchanged penalties.

Veteran right-wing Odwa Ndungane got Sharks' third try on the stroke of half-time, gathering a cross-field kick after Bulls skipper and No. 8 Pierre Spies was robbed of the ball.

A Lambie touchline conversion meant a handsome 14-point lead for a side who disappointed last season with the failure to make the play-offs costing New Zealand coach John Plumtree his job.

After a Lambie penalty widened the gap, flank Jono Ross offered the Bulls hope of a bonus point by scoring off a driving maul and replacement fly-half Handre Pollard converted.

This try came while Sharks loose forward Jean Deysel was sin binned, but Sharks had the last laugh as sustained pressure reaped a try and an extra point.