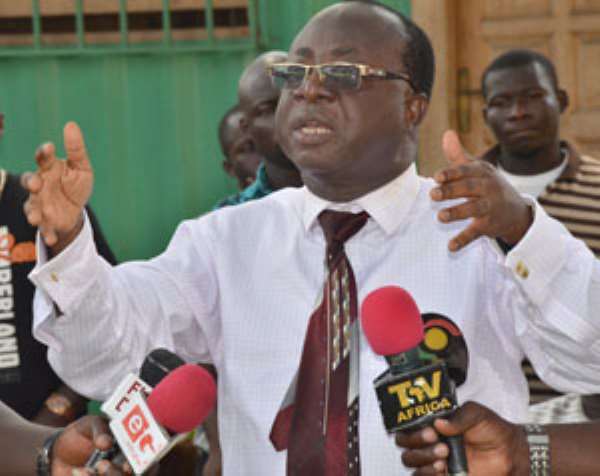 
New Patriotic Party (NPP) youth organizers in the Greater Accra Region last Friday trooped to Nima to pledge their support for Freddie Blay in his bid for the position of First Deputy Chairman of the party, as it goes to the polls in April.

The genuineness of their solidarity with Mr Blay who once served as First Deputy Speaker of Parliament under the Kufuor Administration was not in doubt, when they took turns to pledge their unalloyed support for the man whom they consider as an important source of inspiration to them.

One thing cut across their remarks: 'We want you to support the party with your wealth of experience to win power and to represent the party at critical Inter Party Advisory Committee (IPAC) meetings among others so the party could be exalted to greater heights and to ultimately win political power.'

The newly-elected Greater Accra Youth Organiser of the party, Prince Obeng told Mr. Blay that 'we woke up to learn the good news that you want to contest for the position of First Deputy Vice Chairman of the party. Your decision to contest has taken the party to a higher pedestal. We are here to assure you about our support.'

The youth organizers of the party in the region, he said, would support Mr Blay to clinch the position for the good of the party.

Freddie Blay (right) listerning to the NPP Youth
He noted that Mr Blay could play critical roles in IPAC meetings and other activities requiring the kind of experience he has up his sleeves.

In his response, Mr Blay expressed gratitude to his guests and promised to bring his experience to bear on the party.

He also thanked volunteers of the party who have stood up to work for the party's interest at this time. 'May God bless all of them,' he said.

Mr Blay told his guests that he wants to work for a Ghana under an NPP administration where 'all would go to the same school and reverse the situation under the present government where the youth would be left rudderless, leaderless and aimless. This is bad for this country,' he said.

'Let us grab power if we want it. Let it happen. I am promising that I have the magic wand to change things. I pledge however to be a team player and with the other leaders of the party and you, turn things around and bring the NPP back to power, bring back the smiles on the faces of Ghanaians. We want to make the economy healthy, tackle crime. We have proven that we are capable of handling the affairs of this country better,' he told his cheering guests.

He promised to use his experience alongside the support of others to wrest power and move the country forward.

Mr Blay, who was elsewhere attending to other businesses, had a call about the party delegates waiting to share a word with him. He was overwhelmed with excitement by the sheer numbers and the verbal show of support they rendered when he set eyes on his guests.