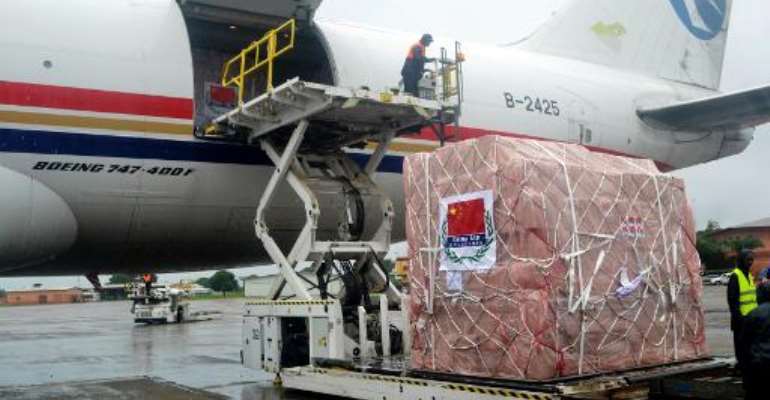 Workers unload medical supplies from China for countries hit by the Ebola outbreak at the Conakry airport on August 11, 2014. By Cellou Binani (AFP/File)

Freetown (AFP) - Sierra Leone said on Tuesday it would seek a shipment of a controversial experimental drug to fight an Ebola outbreak which has killed 315 in the impoverished west African nation.

The ministry of health told AFP it had prepared a letter to send to the American manufacturer of ZMapp, an unlicensed serum being made available in neighbouring Liberia.

"The WHO has just approved our request for the drug ZMapp to be made available to both Sierra Leone and Liberia," ministry spokesman Sidi Yahya Tunis told AFP.

"We have just finished writing a letter which we will send to the manufacturer, copied to WHO, for the drug to be made available to us.

"That's where we are at the moment. We hope to hear from the manufacturer within the next couple of days."

The WHO authorised Tuesday the use of ZMapp as the death toll reached 1,013 in the epidemic, the worst since Ebola was first discovered four decades ago.

But it was unclear if any of the treatment would be available in Sierra Leone, which has seen 730 Ebola cases, more than any other country.

The declaration by the UN's health agency came after ZMapp said it had sent all its available supplies to hard-hit west Africa.

Cases have been limited to Guinea, Liberia and Sierra Leone, which account for the bulk of victims, and Nigeria, where two people have died.

He had been treated with ZMapp, which failed to save him but has shown positive effects on two US aid workers also infected in Liberia.

There is no available cure or vaccine for Ebola, which the WHO has declared a global public health emergency, and the use of experimental drugs has stoked a fierce ethical debate.

Despite promising results for the ZMapp treatment, made by private US company Mapp Biopharmaceutical, it had only been tested previously on monkeys.

ZMapp is also in very short supply but the company said it had sent all available doses to west Africa free of charge after an outcry over its use on foreign aid workers.

It didn't reveal which nation had received the doses, or how many were sent, but WHO assistant director general Marie-Paule Kieny said the agency had been told three doses were sent to Liberia.

The use of unauthorised drugs that had proven safe and effective in monkeys could be a "potent asset" in the fight against Ebola, she said.

Sierra Leone President Ernest Bai Koroma has expressed his "utter dismay" at the "slow pace" of the international community in responding to the outbreak.

The WHO's Freetown office told AFP the president had contacted world leaders to convey his disappointment over inertia among Western nations, without specifying which ones.

Eight Chinese medical workers who treated patients with Ebola have been placed in quarantine in Sierra Leone, but Beijing has not said whether they were displaying symptoms of the disease.

In addition, 24 nurses have been quarantined, health officials said, while a physician had contracted Ebola but was responding well to treatment.

The nation's sole virologist, who was at the forefront of its battle against the epidemic, died from Ebola last month.

Massive rot as 9 heads roll at Keta Municipal Assembly over ...
15 minutes ago