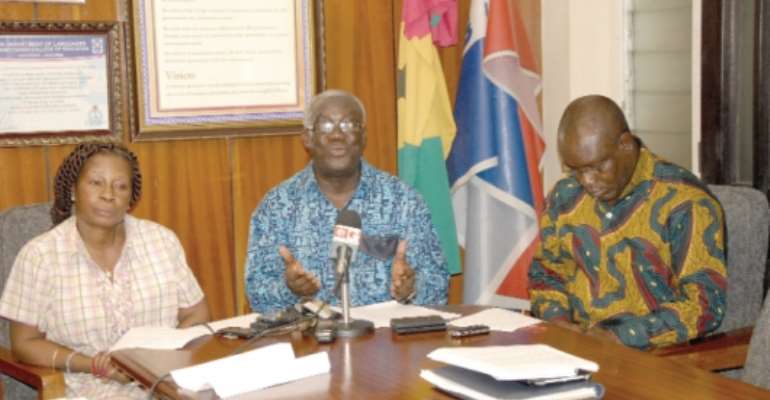 Organised labour has asked the Social Security and National Insurance Trust (SSNIT) and the Bank of Ghana (BoG) to, as a matter of urgency, put a freeze on all negotiations for the takeover of the Merchant Bank.

At a news conference in Accra yesterday, organised labour said its different constituents were of the view that it would be prudent for the SSNIT Board and the BoG to suspend the sale of the bank to allow for further investigations into the matter.

Seven-point statement
The sale of Merchant Bank to the Fortiz Equity Fund has been embroiled in controversy and series of debates in the media and Parliament.

The group presented a seven-point statement outlining its reasons for the suspension of the sale of the bank to Fortiz.

Mr Asamoah is the Spokesperson for organised labour and Secretary General of the TUC, who read the statement, which was signed by the leadership of all the six groups represented at the event, said the demand for the suspension of the deal should be treated with the seriousness it deserved.

However, he would not give a definite timeline for its demand to be met.

He did not state either what line of action organised labour would take if its demands were not met.

According to Mr Asamoah, the organised labour had not received any communication to the effect that Merchant Bank had been sold to Fortiz.

“The BoG will have to do exhaustive due diligence on the whole process,” he said.

Demands
Mr Asamoah said the request being made by organised labour was without prejudice to the legal suit currently before the courts.

“In the interim, we believe Merchant Bank has a potential to recover from its current distressed position. SSNIT should, therefore, make the necessary arrangements to recapitalise and restructure the bank's management in particular to ensure its viability,” he said.

After putting a freeze on the sale, the group asked that all efforts be made by Merchant Bank to recover all its outstanding loans.

“We strongly believe that if these measures are taken, workers' uproar and the public agitation over the transaction will be minimised and calm restored. Merchant Bank will be in a position to recover,” he stated.

Organised labour also called for the identity and sources of funding of Fortiz, which has indicated its desire to buy the ailing bank.

Promise
The group promised workers of Merchant Bank that their interests would be protected and their rights fully respected.

Organised labour also promised contributors of SSNIT that their interests would be protected at all times and that any attempt to jeopardise the viability and sustainability of SSNIT and pension funds in general would be vehemently resisted.