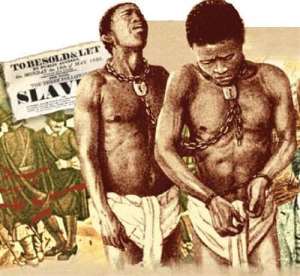 Africans were enslaved by Britain and the United States in continental North America for nearly 250 years (1619-1865). The profits accrued from the Atlantic Slave Trade led to the rise of industrial capitalism and the worldwide exploitative system of imperialism. (See Capitalism and Slavery by Eric Williams, 1944)

A new film directed by Steve McQueen, a Caribbean British filmmaker of Grenadian descent, captures the horrors of slavery in the U.S. in his depiction of an autobiography, “12 Years a Slave”, written by Solomon Northup in 1853. Northup was legally a free African living in Saratoga Springs, New York who was lured to Washington, D.C. and kidnapped into slavery in Louisiana.

Northup's life in New York was portrayed as a successful one with a loving wife and two children.

A skilled carpenter and violinist, he was invited by two white men in 1841 to come to the nation's capital to negotiate the terms of a performance tour. He was then drugged, chained to the floor of a ship and transported to Louisiana where he became a slave.

It would take twelve years for Northup to escape the slave masters. He was subjected to enslavement by three plantation owners, the final one of which tormented and tortured him along with other Africans.

Although Northup's skills were exploited by the plantation owners, his treatment illustrated the lack of humanity on the part of the slave masters. Africans are portrayed in the film as not only victims of the racist and exploitative system but also as resisters who defied their captors through slowing down work production, running away and fighting against brutality by the overseers and owners.

Northup was played by Chiwetel Ejifor, an acclaimed African British actor who was born in London to Nigerian parents in 1977. He began acting during his school years at the age of 11.

Ejifor has received numerous acting awards and nominations, including the 2006 BAFTA Awards Rising Star, three Golden Globe Awards' nominations, and the 2008 Laurence Olivier Award for Best Actor for his performance in Othello. He played Okwe in Dirty Pretty Things (2002), The Operative in Serenity (2005), Lola in Kinky Boots (2005) and Luke in Children of Men (2006).

One of the most compelling performances in the film was the depiction of “Patsey”, an African slave woman who was subjected to horrendous abuse by the plantation owner Edwin Epps. The owner attempts to rationalize his abusive behavior through a false interpretation of the Bible that supposedly justifies the torture and rape of the enslaved.

“Patsey” was brilliantly portrayed by Kenyan actress Lupita Nyong'o. This film represented her debut in films in the U.S.

Nyong'o is the daughter of Kenyan politician Peter Anyang Nyong'o, who had previously served as the Minister of Medical Services and was elected to the national parliament in the recent 2013 elections to represent Kisumu County in the Senate. Lupita's cousin, Isis Nyong'o was named by Forbes magazine in 2012 as one of the most powerful women in Africa.

Lupita Nyong'o graduated from Hampshire College after studying film production and theater. She has worked on various films and would later attend Yale Drama School where she graduated in 2012.

The plight of Solomon Northup portrayed in this film was by no means an isolated incident. There were many Africans who were considered “free” that later wound up on plantations.

The narratives and autobiographies of enslaved Africans have made a tremendous contribution to the exposure of the exigencies of the slave system. These accounts are taken directly from those impacted by the exploitative and oppressive system.

This film makes a monumental contribution to the popularization of consciousness about the political, social and economic origins of the U.S. capitalist system. Slavery was not only a moral issue but its existence was indispensable to the development of the ruling class as the dominant force in world imperialism.

The impact of slavery is still very much in evidence in the U.S. today. Racism and national oppression have not been overthrown and the government has consistently refused to recognize the contributions of slavery to the political and intellectual culture of the country.

Moreover, the U.S. government and capitalist corporations have refused to pay reparations to the descendants of enslaved Africans. Even current President Barack Obama, whose father was born in Kenya, stated during his initial presidential race in 2008 that he opposed the payment of reparations to African descendants in the U.S.

Nonetheless, many African Americans are continuing to demand reparations for slavery and remain in the forefront of the struggle against racism and national oppression. The U.S. will never become a truly democratic and just society until it comes to grips with the legacy of slavery through the realization of full equality and the right to self-determination for African people.

No one is above the law except the President - Oliver Barker...
38 minutes ago