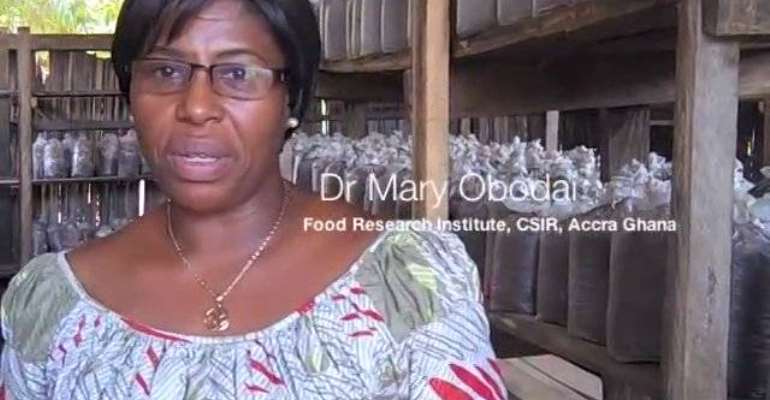 Accra, Nov. 17, GNA - The Food Research Institute (FRI) has organized a mushroom Spawn multiplication technology Production training workshop for some selected group of people from four regions of the country.

Mushroom farmers, entrepreneurs, organizations, institutions and housewives from the Brong Ahafo, Ashanti, Eastern and Greater Accra regions attended the workshop, aimed at renouncing the myth that the spawn technology was artificial and also to expose people to the fact that all the processes were natural.

The technology consists of mix dried and milled cassava peels/sticks with sawdust in a 1:1 ratio with rice bran and quicklime.

Water is added to mixture to obtain 70% moisture content (squeeze test) after which the compost mixture sit for 28 days with regular turnings every 4 days. The mixture is then bagged in high-density polypropylene bags and sterilizes in oil drums.

The bags are inoculated with mushroom spawn, stored in an incubation room to complete colonization of mushroom mycelium, after which bags are opened in the cropping house for fruiting.

The major constraints of the technology are the non-availability of spawn. Therefore when such spawn production technology is transferred to mushroom farmers, they will be developed to grow minimum 1-2 quintals of mushroom per day, thus creating incomes for the better livelihoods, said Dr. Mary Obodai, a mushroom specialist of the FRI, at the workshop.

She however cautioned that it cannot be stored and that people should understand and appreciate it better with more practicality.

Dr Obodai said mushroom production, using peels, has been identified as one of such technologies, which could be replicated for economic and nutritional gains.

According to her a lot of research, experiments and trials have gone into these technologies and finally confirmed its results.

The workshop, under the GRATITUTE PROJECT, is one of the numerous EU funded projects and being run by CSIR - Food Research Institute, and seeks to develop some technologies from cassava and yam peels that would bring value, profit or gains to the economy.

The GRATITUDE project preliminary study has revealed that yam and cassava peels can be used as alternative substrate for cultivating quality mushroom.

The European Union funded project is on the theme: 'Reducing Post - Harvest losses for increased security.'