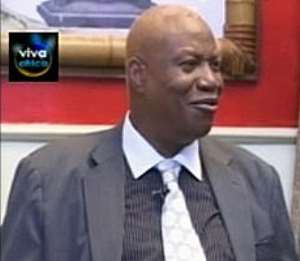 Vice Chancellor of the University of Professional Studies (UPS) has vehemently denied allegations  that authorities are deliberately erasing the name of the Founder from the university's history.

But in a rejoinder signed on behalf of the Vice Chancellor by James Afedo his spokesperson, the university indicates the allegations are entirely false.

In the interview and the follow on news reports, Nana Opoku Ampomah is heard suggesting among others that the Vice-Chancellor Professor Joshua Alabi is allegedly making deliberate efforts to erase his association with the University.

We would like to place on record that all the claims in the interview and the news report are not accurate. Professor Alabi has not, cannot, and will never negate the role Nana Ampomah played in founding the University.

Although the university has been a public institution since its takeover by government in 1978, Nana Ampomah's name has since remained synonymous with the then IPS (now UPSA). That is why at every speaking opportunity, the Vice-Chancellor and other management staff pay glowing tributes to Nana Ampomah for his initiative in founding the university. This also includes the recent Special Congregation held on Friday November 8, 2013 to award Honorary Doctorate degrees, at which both the Vice-Chancellor and His Royal Majesty Otumfuo Osei Tutu II publicly acknowledged him extensively in their speeches.

It is public knowledge that the University is currently undertaking massive infrastructural developments in order to improve the teaching and learning environment, with the aim of making the University more attractive to its growing local and international students. With such major construction projects, old things must naturally give way to new ones. For instance, old lecture halls have been demolished, and new ones have been built; old hostel has been demolished and a new one is nearing completion; and the founder's statue is being relocated.

The University had already concluded plans to re-erect the founder's statue at a more prominent area of the redeveloped campus.

It is our believe that the nation must continue to honour visionary people like Nana Ampomah, as well as others who have been founding fathers of prominent institutions, including Mr. J. H. Mensah who founded the Saint John Grammar School, and Mr. Quay Nungua, founder of the Nungua Secondary School.

Therefore, we are reassuring our Founder, Nana Opoku Ampomah that his role and legacy is an indelible part of the history and success story of our fast expanding university.

#EndSARS: Rawlings Urge Nigerians To Use Non-Violent Engagem...
12 minutes ago