THE PARTISAN WOLF IN OBJECTIVE SHEEPSKIN IN GHANA 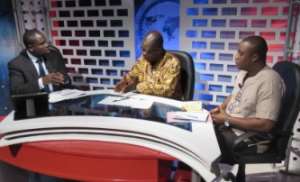 It is often said that “the bird that dances in the middle of the road only knows where its music comes from”.

In the year 2012, some radio stations and media organisations frequently sought the views of one Dr. Michael Kpessah Whyte or Dr. Michael W. Kpessa. He was portrayed and unleashed unto the unsuspecting Ghanaian public as an independent and objective academic with a world view on Ghanaian politics and current affairs. With this in mind, we watched helplessly as he misled Ghanaians, especially the young political aspirants on the political landscape of this country.

After all the hard sell about his so-called objectivity, we now know better than what the media sought to portray in 2012. It is public knowledge that Dr Michael Kpessah Whyte is now a Presidential Staffer in the Office of the NDC President John Dramani Mahama. In fact, we are now in a better position to be pleased about why Dr Kpessah Whyte makes so much argument by selective observation as well as his pre-conceived biases towards his political opponents. It is not for nothing that in Matthew 7:16 it is stated “Ye shall know them by their fruits. Do men gather grapes of thorns or figs of thistles”?

Can Dr Whyte sincerely say that he is not a member of the NDC and he has never been a member? What would become of his so-called independent mindedness when the NDC goes into opposition, would he button his lips and clam up? Would he have the same moral courage to praise everything government does and attack political opponents? Most Ghanaians do not want to believe that Dr Michael Kpessah Whyte would be caught in a traffic jam of discursive thought.

It would be recalled that in November 2012 when NDC politicians were raining insults on religious leaders in the country, this same political scientist joined the NDC apparatchiks in tongue-lashing one of Ghana's revered men of God, Pastor Mensa Otabil. According to Dr Whyte, “There is nothing wrong with rebutting the way he did. But he needs to understand the terrain and the environment within which he was doing this. “...There was a tape that was being played. It happened to be his voice. Of course he has a right to express his views like he did. But doing it in the manner and associating the president with it and using words like Machiavellian, evil and those things. For a man of God I think that really was not measured at all,” "…must not shy away from criticizing our religious leaders when they also go wrong. They are not God. They are only God's representatives here. They are human…”

Then again, this same man whom many flaunt as an objective academic on the Martin Amidu case said, “If he wants to be taken very seriously as somebody who claims to have had an insight in government and also a founding member of NDC, then he needs to cite specific instances in which the individual around which his letter revolve was involved in any wrong-doing”. He said, Amidu's statement “was couched in a language that seem to suggest that he was going to provide us with some evidence to prove that the President is not as incorruptible as he seem to suggest but reading the whole document to the end; it appeared that it was all basically based on the figment of his imagination”.

So when the academic turned presidential staffer waded into the Brigadier-General Nunoo Mensah's controversy, he only defined his partisanship as a true NDC man and this is what we want the media and the general public to know and be aware about the wolves in sheepskin. In the Brigadier's controversial statement which has been condemned by most Ghanaians, Dr Kpessah Whyte said the following:“I think the General was actually too kind even in his choice of words as far as this particular issue is concerned.” “If we don't learn to call a spade a spade in this country, and stop calling [a] spade a smaller spoon or a bigger spoon or whatever it is, we will continue to find ourselves in the kind of situation we find ourselves in. I don't see why anybody should attack the General for the kind of comments. It is indeed frustrating”.

In view of all of this, it is important to share with the Ghanaian public excerpts of what some concerned members of the PPP said about this man's views in 2012 when he sought to defame the strength of the Progressive People's Party and even suggested that the party will die off after the 2012 elections.

DR KPESSAH WHYTE MUST COME AGAIN!
It is with great humility that concerned members of the PPP wish to respond to attempts by certain self-styled political analysts to undermine the efforts of our party to establish itself firmly as a force to reckon with in Ghana. We know we must work hard and prove ourselves. We know we have a lot to do. However, we find it quite preposterous for anybody to accept the proposition made by political analyst, Dr. Kpessah Whyte that it would take the Progressive People's Party (PPP) “…a long time to be recognized as a credible third force in Ghanaian politics”. We asked what field research Dr Whyte had done in the three months that our party was in existence? Where did he go in the ten regions of the country and with what methodology did he do the work that he used as the basis for dismissing the efforts of over 26,000 paid up members of the new party called PPP? Interestingly, after the 2012 elections, the PPP demonstrated its strength and became the third largest political party, and the second biggest opposition party in Ghana.

We congratulate Dr Michael Kpessah Whyte for his new appointment as presidential staffer in the NDC-Mahama led Presidency after singing the “appropriate” tunes behind the blinds. And these are the sort of people advising the President – Kpessah Whyte, Clement Apaak, etc. Can the so-called independent mindedness of our intelligentsia be trusted at all? Of course, time is the revealer of all truth.

But as America's Ex-President Richard Nixon once said “The jawbone of an ass is just as dangerous a weapon today as in Sampson's time."

They Sent 'Dante Crocodiles' To Our Area To Scarce Us — Ajum...
16 minutes ago

VIDEO: May Ken Agyapong Suffer From Paralysis And Be Numbed ...
35 minutes ago