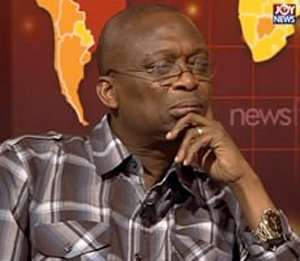 The Editor-In-Chief of the New Crusading Guide, Abdul Malik Baako has gauged comments by the National Security Advisor concerning strike actions on the labour front, saying he is frustrated.

He described comments of the security capo as not only crude but 'tactless' and 'insensitive.'

Brigadier Nunoo-Mensah, a 1979 Chief of Defence Staff in the Armed Forces Revolutionary Council government, said workers do not deserve their pay while on strike.

'Every Tom, Dick and Harry gets up and is calling for a strike. If you don't want the job, Ghana is not a police state, take your passport and get out of this country… 'If you can't sacrifice like what some of us have done, then get out. If the kitchen is too hot for you, get out,' Nunoo-Mensah emphasized.

A number of people have criticized the comments by the security capo.

National Democratic Congress (NDC) MP for Dadekotopon, Nii Amasah Namoale, said the remarks by the former solider remarks were fit for the barracks.

Dr. Charles Wereko-Brobby, Chief Policy Analyst at the Ghana Institute of Public Policy Options, said the National Security Advisor does not deserve to be at post because he has become an “instrument of insecurity and insurrection.”

Contributing to discussions on Metro TV's Good Morning Ghana, the Editor-In-Chief Abdul Malik Kweku Baako slammed the Brigadier-General, saying there was an “abysmal failure” in his communication.

He said via text that in the face of industrial unrest Nunoo-Mensah's comments had poisoned the atmosphere needed for negotiation.

According to Kweku Baako, even though some of the Brigadier's sentiments have basis in law, his tone condemned him beyond any rationalization.

'Leadership must come with finesse not frustration,' he cautioned.