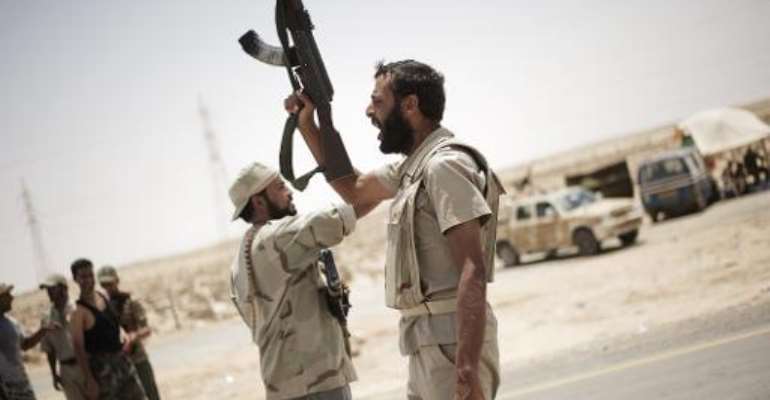 A Libyan rebel fighter mans a checkpoint some 18 kilometres west of Ajdabiya, on July 19, 2011. By Gianluigi Guercia (AFP/File)

Benghazi (Libya) (AFP) - Dozens of Egyptian truck drivers were freed on Sunday after being abducted by a Libyan armed group pressing for the release of Libyans detained in Egypt, a security source said.

"The drivers who were held by armed men in Ajdabiya (in eastern Libya) were released by their captors," the source told AFP on condition of anonymity.

They were able to head for home in neighbouring Egypt, the source said.

The armed men began abducting the Egyptian drivers on Thursday, and since then more than 80 of them had been snatched.

Egypt's envoy to Tripoli, Mohamed Abu Bakr, confirmed the release of the men, adding they had been "detained" but "not abducted" and were all treated well.

"They have been able to leave," some back to Egypt, while others continued on to destinations inside Libya, he said.

On Saturday Egypt said it was holding intense talks with Libyan authorities to secure the release of more than 20 Egyptian drivers after a Cairo daily reported 50 had been abducted.

Egypt's independent daily Al-Masry Al-Youm quoted Libyan militia chief Ahmed al-Libi as saying he was holding 50 drivers and would only release them if Libyans arrested in Egypt were freed.

Libi, who spoke to the newspaper on Thursday, warned he would kill the Egyptians and kidnap more if Cairo failed to release the detained Libyans within 10 days.

Thousands of Egyptians regularly travel to Libya, mostly for work.