Pastor Adeboye, RCCG and Homophobia in the Pacific 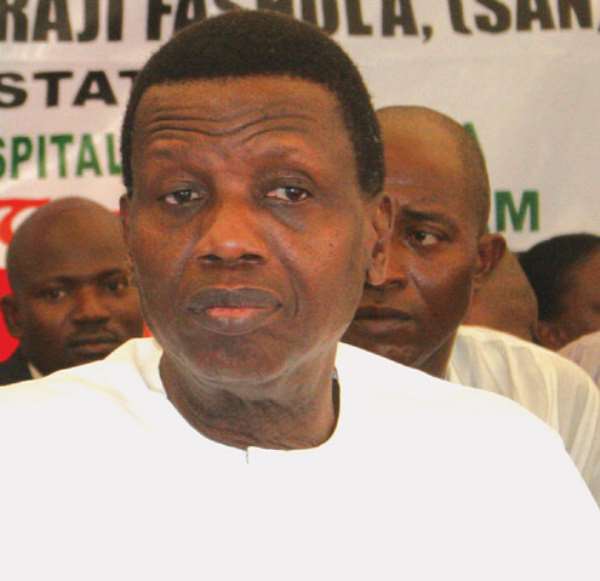 There are legitimate concerns over Pastor Enoch Adeboye's proposed evangelical tour of the Pacific in November. Pastor Adeboye is expected to visit Canberra, Melbourne, New Zealand, Fiji, Solomon Islands, Papua New Guinea, Sydney, and Perth next month. He is scheduled to preach at these places, and inaugurate branches of the Redeemed Christian Church of God (RCCG).

The tour is part of the 'Let the Wind Blow' spiritual event. The program is meant to 'celebrate miracle of your life in song, prayer and praise' (1), and get people to experience the 'wind of salvation, healing and deliverance' (2). But there are concerns-genuine concerns- over what appears to be an innocuous evangelical exercise.

This tour may not happen because human rights groups, religious liberals and secular organisations are rallying against it. They are mobilizing mainly because of the homophobic stance of Pastor Adeboye and his RCCG. Even if the tour goes ahead, Pastor Adeboye will be greeted with protests by those who object to his hate mongering sermons and preachings.

Many people in the Pacific do not want Adeboye to bring his gospel of gay hate and intolerance, his anti-gay church and ministry to their region. They do not want an evangelical wind that will blow and role back the gains and progress they have made in critical areas of human rights and marriage equality.

Early this year, Pastor Adeboye has, at an event organized by Joint Christian Mission at Obafemi Awolowo University, declared that 'same sex marriage will wipe out humanity'. He was one of the Nigerian clerics that openly and publicly supported the anti-same sex marriage bill which was passed by the National Assembly. Adeboye said:

“Same-sex marriage is an anathema to the will of God for human beings to be fruitful, replenish and multiply on earth. Anything contrary to that is evil. How can a man who marries a fellow man produce a child and how can a woman who marries a fellow woman produce a child? If this evil is allowed to stay, there will not be newborns again in the world. As the older generation dies, will there be a new generations to succeed it? Even plants and animals have new generations to succeed them.”(3).

Pastor Adeboye has, in this statement, demonstrated his ignorance and bigotry. He showed his inability to use his position to preach and promote love and tolerance of persons without discrimination on the basis of sex or gender identity. Morally, he failed, at a critical stage in the legislation process, to rally support and respect for a persecuted minority.

And I ask: Is that the gospel Adeboye is going to preach and promote in New Zealand where same sex marriage is legal? How does Adeboye think the people in Australia, where homosexuality is not a crime, will receive his 'message'?

Adeboye's declaration is only a reflection of his church's position on gay sex. There is at RCCG a 'zero tolerance of homosexuality' and the rights of gay people. RCCG is not just anti-gay, it outs any of the members who is suspected to be gay. A profile on the mission of RCCG states:

“The Redeemed Church has a zero-tolerance policy on homosexuality in its congregation, and, reportedly encourages members to report the names of fellow members who they believe could be gay. The missionary statement of the Church goes as far as to imply "homosexuality" caused the great Biblical flood. "When God was going to destroy the world in the days of Noah there was so much sin and iniquity. Pleasure, godlessness and homosexuality were the order of the day”. Adeboye and his church make it seem as if to be a 'true christian', one must be anti-gay. It is not so. Recently, South African cleric and Nobel peace laureate, Archbishop Desmond Tutu said he would rather go to hell than worship a homophobic god or go to a homophobic heaven(5). Adeboye and his church members surely need to borrow a leaf from Desmond Tutu. They need to renounce their homophobic god and turn their back on their homophobic heaven. But that has not happened yet.

Going by their missionary statement, it is safe conclude that the wind of Pastor Adeboye's anti-gay gospel and RCCG's faith-based homophobia will not blow in the Pacific. It will be fiercely opposed. This hateful evangelical current will be vehemently resisted. If most Nigerians have, due to fear, blind faith, gullibility, prejudice and ignorance, refused to condemn and speak out against religious homophobia and bigotry, people in the Pacific will do so.

With their anti-gay stance, Adeboye and his church are already set on a collision course with the laws and values of the people of Australia, New Zealand and other Pacific nations.

Provide evidence to prove your preposterous, xenophobic comm...
23 minutes ago