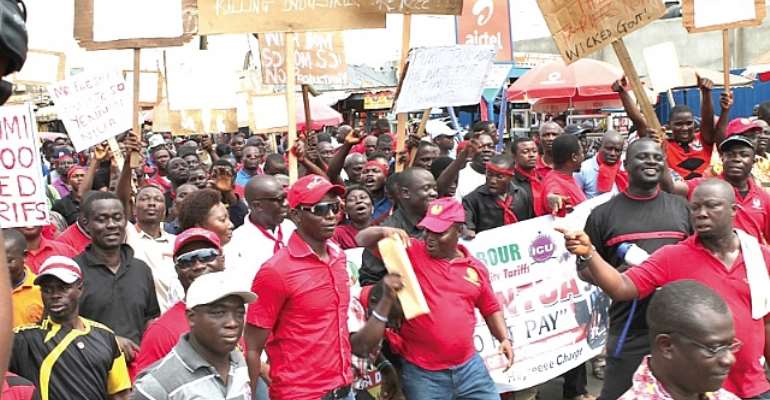 Hundreds of workers in the Tema metropolis yesterday demonstrated to press home their demand for a reduction in the recent hikes in water and electricity tariffs.

The peaceful demonstration was organised by the Tema District Council of Labour (TDCL) of the Trades Union Congress (TUC).

A last-minute attempt by the police to stop the demonstration was ditched by the Tema Circuit Court, where the police had sought to seek an injunction to restrain the workers.

Prior to that, the police had dispersed the workers, who had gathered at the Tema Community Centre at 7 a.m. in readiness for the demonstration.

In a show of determination, the workers, who wore mostly red, re-assembled after the court had dismissed the case by the police on the grounds that the day for the demonstration had been mutually agreed upon by the police and the leadership of the workers.

The workers then hit some of the principal streets of the Tema metropolis, holding placards, some of which read, 'Yen ntumi ntua wicked tariffs', 'We Dey Die Keke', 'Government with dum so, dum so on products' and 'Touch one Touch All'.

Background to demonstration
Speaking to the Daily Graphic, the Chairman of the TDCL, Mr Wilson Agana, explained that the council met over the price hikes on October 8, 2013, during which 'we discussed extensively the astronomical increases in water and electricity tariffs by 52 per cent and 78.9 per cent, respectively'.

Mr Agana said organised labour bemoaned the adverse social and economic effects of the utility hikes on workers and their families.

He said organised labour found it unacceptable and asked the government and the PURC to reduce the tariffs, considering the meagre increases in workers' salaries and wages.

He promised that the TDCL and organised labour in Tema would support the TUC to massively demonstrate to demand a response from the government, if by the deadline on October 22, 2013, the government had failed to adhere to the genuine demands of workers.

Resolution
A resolution was later presented to the Human Resource Officer of the Tema Metropolitan Assembly (TMA), Mr Daniel Nyaho Dati, who received it on behalf of the government.

The Tema Regional Police Commander, DCOP Maxwell Atingane, told the Daily Graphic in an interview that the police had sought an injunction from the court to be able to prepare adequately for the demonstration.

He said there were some incidents in the region which required the attention of the police, for which reason the law enforcement agency called for a suspension of the demonstration.

DCOP Atingane described as unfortunate the court's decision to dismiss the case filed by the police.

He noted, however, that the few policemen who were at post were able to ensure a peaceful demonstration by the workers.