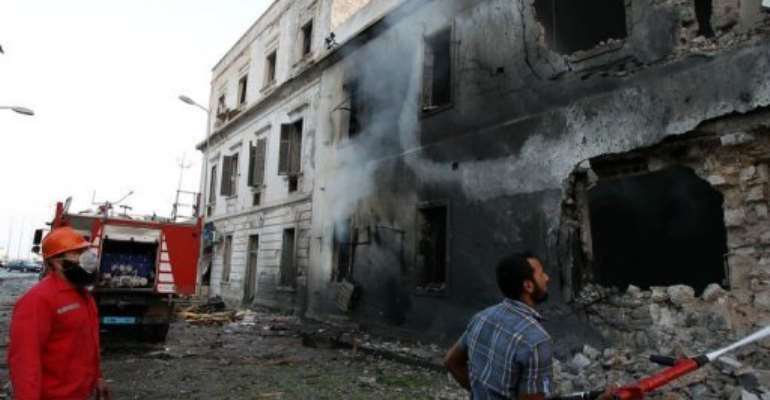 Firefighters extinguish a fire caused by a blast near a foreign ministry building in Benghazi on September 11, 2013. By Abdullah Doma (AFP)

BENGHAZI, Libya (AFP) - A car bomb exploded Wednesday outside a building that once housed the US consulate in the Libyan city of Benghazi in what an official said was a warning that diplomats are not safe.

The blast seriously damaged the foreign ministry building but left no casualties, and came on the anniversary of a militant attack on the current US consulate in Benghazi that killed four Americans, including the ambassador.

Last year's attack in Benghazi had itself been planned to coincide with the anniversary of the September 11 2001 attack.

An AFP photographer said a large section of the building in the eastern coastal city had been destroyed and parts of the nearby local offices of the central bank seriously damaged.

A foreign ministry official said the US consulate had been located in the building during the reign of King Idris but was closed a few years after Moamer Kadhafi overthrew the monarch in 1969.

A ministry statement called the bombing a "cowardly terrorist act aimed at attacking the sovereignty of the state and creating an image of chaos."

The ministry official said those responsible for it "want to send a message that diplomatic offices are not secure in Benghazi."

The city, cradle of the 2011 revolt that toppled and killed Kadhafi, has been hit by a wave of deadly attacks in recent months targeting officers in the security force and members of the judiciary, many of whom served with the previous regime.

Much of the violence, including the killing of the US ambassador Chris Stevens last year, has been attributed to radical Islamists who are deeply rooted in the region.