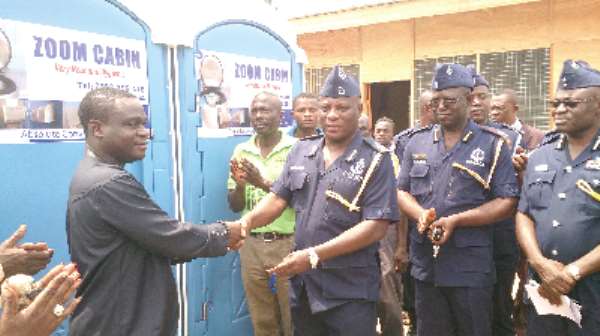 The washrooms, which are fitted with soap dispensers, flushing system and sinks, are to help ensure good sanitation among police personnel who go on duty at various checkpoints in the country..

Presenting the items in Accra, the acting Communications Manager of Zoomlion, Mr Robert Coleman, said the donation was to support the police in their visibility exercise meant to promote law and order.

He said workers of the company would be deployed to ensure that the washrooms were disinfected and kept clean at all times.

According to him, the donation would also be extended to all the 10 regions in the country.

Receiving the items, the Accra Regional Police Commander, DCOP Christian Tetteh Yohuno, lauded Zoomlion for its kind gesture and added that effective policing was a shared responsibility hence the donation would go a long way to help the police service discharge its duties.

He also called on organisations, individuals, and corporate institutions to support the police saying, 'We can't do it alone so we need everyone's support.'