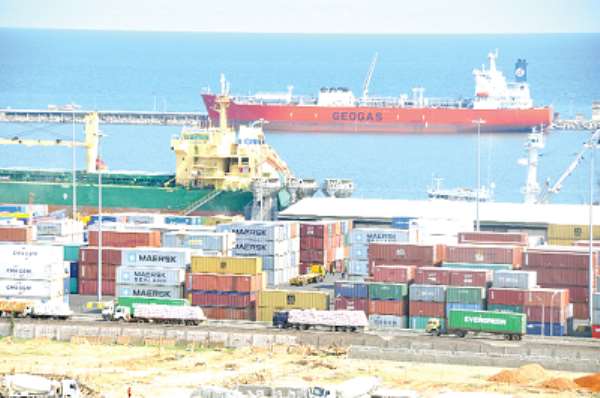 The government has stated that a $6.38 million bailout package paid by the Ghana Ports and Harbours Authority (GPHA) to the departed Malaysian partners of the PSC Tema Shipyard was a loan from the GPHA.

The credit facility, according to the Transport Minister, Mrs Dzifa Attivor, ensured that the government repossessed the 60 per cent shares that were held by the previous Malaysian management.

However, she explained that the shipyard's inability to handle jobs related to the construction of a second floating, production, storage and offloading (FPSO) vessel set to be built in Ghana, in line with the local content requirement in the oil industry, had necessitated the government's decision to cede portions of the facility to Tullow Ghana.

The minister was answering questions on the ongoing negotiations between the government and Tullow Ghana on the possible takeover of portions of the shipyard by the oil giant when she took her turn at the meet-the-press series in Accra yesterday.

Tullow, as part of the local content requirement, must build a second FPSO in Ghana, and since the shipyard is not in a position to handle that work, Tullow's presence in the yard under a two-year arrangement is to ensure the local content demand is met.

'The government has not handed over the management of the shipyard to Tullow. This whole arrangement has been misconstrued. Tullow will provide about 600 jobs and also train existing staff of PSC to ensure that their operations are up to date,' Mrs Attivor explained.

She gave an assurance that no worker would be laid off as part of the current arrangements.

The Trades Union Congress (TUC) recently raised an alarm over the ongoing arrangements between the government and Tullow Ghana.

But Mrs Attivor said Tullow's entry would also see an upgrade of the shipyard to a level necessary for the fabrication of components of the FPSO and also help with equipment upgrade and technology transfer.

Maritime & inland ports
With regard to the maritime and inland ports sub-sector, Mrs Attivor said construction was going on for a bulk cargo handling jetty to handle clinker, bauxite and manganese at the Takoradi Port.

At the Tema Port, she said, expansion works included the development of new container terminals and the dredging of the basin to 16 metres draft to receive larger vessels.

Fishing landing sites
Mrs Attivor indicated that a contract agreement had been signed and submitted to the China Development Bank (CDB) for the development of 11 fish landing sites under the CDB loan facility.

Design works had been completed, while civil works were to start soon, the minister said.

Other problems mentioned were inadequate patrol boats and security equipment, a fleet of ageing commercial vehicles, the absence of a reliable and efficient home-based carrier, as well as a poor railway infrastructure, land for transport infrastructure development having no titles and the absence of facilities to develop inland waterways.