Where Is The Speech I Edited? 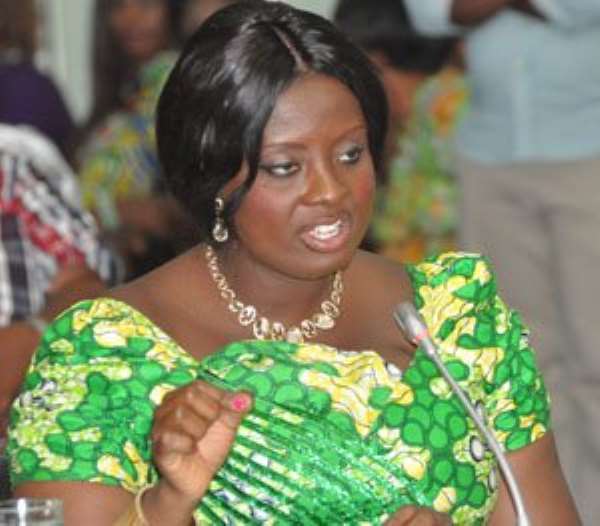 Deputy Communications minister Victoria Hamah made negative headlines when she put up a weird performance while addressing an official function recently.

Social networks expectedly went into overdrive with the contents of her gaffe.

Unfortunately she shares the embarrassment with the state and therefore the people of this country.

She remarked that the speech before her was not what she had edited earlier within range of the PA system.

Call it clowning on stage and you would be right on target. It was a public function and the lady, as government representative, became a laughing stock as soon as the gaffe was given a deserved publicity.

'Where is the speech I edited? This is not the speech I edited. No, I can't read this…This morning, I edited this speech and this is different. And so I am trying to speak from mind. So maybe I would do that. Ah!' were the words the lady uttered.

She was palpably taken aback when the contents of the speech before her differed from what she had seen earlier.

Only God knows the impression she engraved in the memories of those who were treated to the formal theatrical that fateful day.

A number of issues beg for treatment as a result of the mess. Who changed the speech the deputy minister was expected to read at the very serious occasion?

Was it sabotage and what informed the decision by whoever took that line of action?

Although answers to the foregone might not be forthcoming, the conclusion we are drawing from the gaffe is that working experience for certain sensitive positions such as ministerial appointments should be considered when nominations are made.

Standing in front of a large turnout of guests and telling them that you have been messed up is not a good picture. Indeed, it presents a picture of recklessness in the ministry she represents and what an impression that leaves in the memories of the audience, especially foreigners.

Couldn't the minister have handled the situation in a better manner than she did when she appeared to be playacting in front of her audience?

Perhaps, when we listen to a government appointee delivering a statement at the next public forum, we need to ask whether it is the edited speech or whether the minister just decided on the spur of the moment to resort to an extempore delivery to avoid an embarrassing situation.

We should not overlook governance, as it is a serious business and players thereof must exhibit a high level of seriousness, commitment and knowledge of whatever it is they are engaged in.

In an attempt to have as many women as possible in the government a better way of actualizing this project should be looked at, if we

are to avoid such embarrassing situations. Playing to the gallery, which was what played out when some nominations were made, is what we are reaping in the 'this is not what I edited' nonsense.