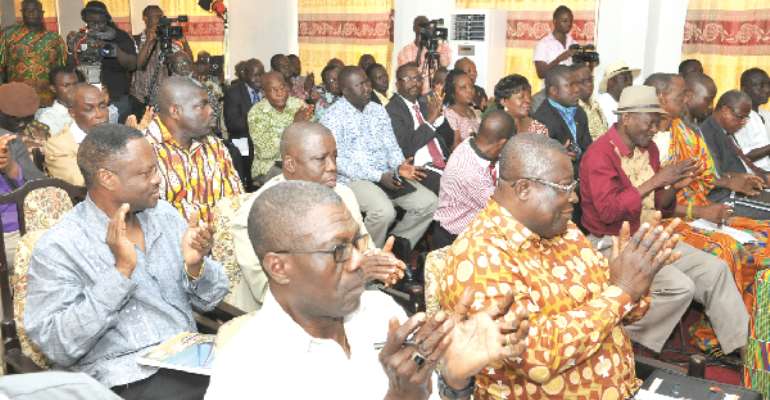 The Trades Union Congress (TUC), has urged the government to take steps to reduce what it described as inefficiencies, wastage and corruption in the public sector payment regime.

The Secretary-General of the TUC, Mr Kofi Asamoah, who made the call said "the phenomenon of ghost names continues to plaque the payroll despite the attempt to biometrically verify workers and pensioners.''

He made the call yesterday, at the opening of a two-day national forum on the implementation of the SSPP at Ho in the Volta Region.

The forum, attended by representatives of employers, labour unions, civil society organisations and academia, seeks to discuss the implementation of the SSPP and come up with a way forward for the implementation.

It is on the theme: "Building National Consensus on Sustainability of Single Spine Pay Policy."

Payroll Management
Mr Asamoah said the TUC was aware of the difficulties in the management of payroll at the Controller and Accountant General's Department.

"We continue to invest in technology replacing one payroll software with another in an attempt to solve the problem.

"The Auditor General's reports continue to chronicle huge amounts of unearthed salaries in nearly all government agencies. All these continue to weigh on the wage bill and have impacted negatively on the implementation of the single spine," the TUC Secretary General said.

He asked the government to complement investment in the payroll technology with political action "that makes payroll fraud too expensive for the fraudsters.''

''The SSPP has brought some sanity in the administration of public sector pay,'' he said.

He said there were challenges with the pay policy and indicated that employers and labour were ironing out the challenges within the framework of the Joint Standing Negotiating Committee.

The TUC Secretary General said the implementation of the SSPP had enhanced the salaries of some workers while others had not experienced any enhancement in their salaries.

''Those that have experienced significant improvements are coming from a low base,'' he said.

Mr Asamoah expressed worry that the SSPP had been singled out for blame for all that had gone wrong with the finances of the country.

He, therefore, asked the Minister of Finance to come with the correct figures and go ahead to disaggregate the figures ''to know who takes what.''

Comprehensive Pay Policy
He said the TUC still stood by its call for a comprehensive pay policy in the public sector that would integrate all pay scales to ensure uniformity and fairness.

Mr Asamoah said it was true that productivity in the public service was low and continued to deteriorate, and indicated that the thinking that the mere implementation of the SSPP would increase productivity was flawed.

He, therefore, stressed the need for ways to be evolved to enhance productivity, saying that ''labour cannot be productive when other important factors are either not in place or obsolete.''

Labour Unrests
The Executive Director of the FWSC, Mr George Smith-Graham, said the labour unrests had affected the implementation of the SSPP.

He said some of the rulings of the National Labour Commission had encouraged more labour agitations and asked the government to find a way of talking to the Commission.

Mr Smith-Graham called for massive payroll auditing to see whether there were leakages and asked the government to take control of internally generated funds of institutions which were on the SSPP.

He also stressed the need for the government to identify viable public institutions and wean them off government subvention.

The Minister of Employment and Labour Relations, Nii Armah Ashietey, gave the assurance that the views that would be expressed at the forum would be taken on board to guide the implementation of the SSPP.

Don’t give me reason to close down schools again – Akufo-Add...
30 minutes ago