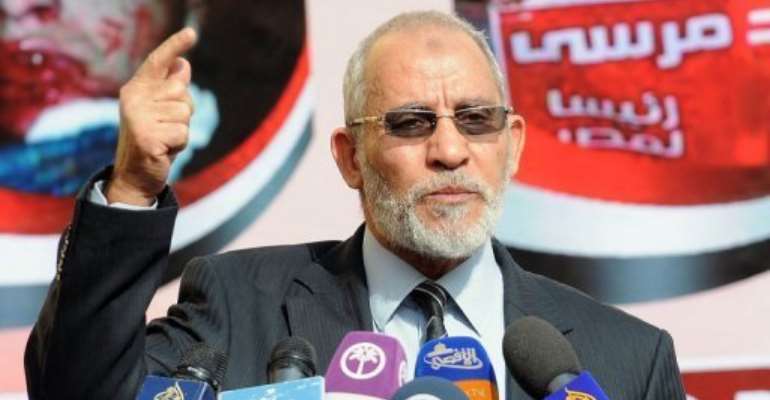 Mohammed Badie speaks during a press conference at the party's headquarters in Cairo on August 8, 2012. By Mahmoud Khaled (AFP/File)

It came as US Deputy Secretary of State William Burns met the army chief amid intense efforts to try to resolve the political crisis since the army ousted Morsi in a July 3 coup.

Supreme Guide Mohammed Badie, who is currently in hiding, and his two deputies -- Khairat al-Shater and Rashad Bayoumi -- who are being held in Cairo's Tora prison, are accused of inciting violence against protesters outside the Islamist group's headquarters on June 30.

They will face trial on August 25 together with three Brotherhood members who are accused of killing protesters.

Morsi himself has been formally remanded in custody on suspicion of offences committed when he escaped from prison during the 2011 revolt that toppled former president Hosni Mubarak.

Sunday's announcement comes after army chief Abdel Fattah al-Sisi met Burns, a military source said, stressing the need for national reconciliation based on an army-drafted roadmap providing for elections in 2014.

Sisi earlier met Islamist leaders to try to mediate a solution with Morsi supporters who have staged two major sit-ins for more than a month demanding his reinstatement.

He met "several representatives of the Islamist movements... and stressed that there are opportunities for a peaceful solution to the crisis provided all sides reject violence," army spokesman Colonel Ahmed Aly said in a statement.

Among those attending the talks were influential Salafist clerics Sheikh Mohammed Hassan and Mohammed Abdel Salam, who just days ago addressed pro-Morsi supporters from the stage at one sit-in.

"The Islamists who met Sisi, while not members of the Muslim Brotherhood, have been supporting them at the Rabaa al-Adawiya sit-in. Hopefully, the Brotherhood will listen to what they have to say to find a way out of the crisis," a source close to the talks said.

Supporters of Morsi -- Egypt's first freely elected president-- see his ouster by the military as a violation of democracy and have insisted that nothing short of his reinstatement would end their protests.

They have called for more protests on Sunday night.

Authorities have repeatedly called on them to go home, promising them that a safe exit would allow Morsi's Muslim Brotherhood to return to political life.

After meeting Burns, the Brotherhood's political arm stressed its continued commitment to "legitimacy, which stipulates the return of the president, the constitution and the Shura Council," or upper house of parliament.

The Islamists' latest declaration suggested he had failed to shift their position.

"We affirm our welcome of any political solutions proposed on the basis of constitutional legitimacy and rejection of the coup," said the Freedom and Justice Party statement.

The diplomatic push came as the Washington Post published an interview with Sisi, who lashed out at Washington, urging it to pressure Morsi supporters to end their rallies.

Sisi said that police, not the military, would be charged with dispersing the protests, and insisted that millions of Egyptians "are waiting for me to do something".

Tensions have spiked over a looming police bid to dismantle the pro-Morsi sit-ins.

But Fahmy insisted authorities have "no desire to use force if there is any other avenue that has not been exhausted".

"There is an open invitation for all political forces to participate. The door is open for everybody, including the Brotherhood, to participate in the process," he told reporters.

"If the political landscape does not have space for everyone, it cannot be an inclusive democracy."

The interior ministry has warned that protesters not quitting the sit-ins would be exposed "to legal action over the involvement in several criminal acts by some in the gatherings, including killing, torture, kidnap, carrying weapons... and incitement to violence".