Boys to Men: The Invention of Adolescence 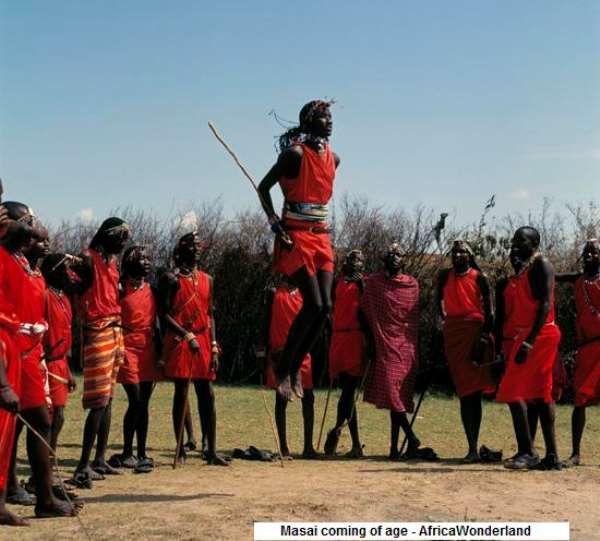 A life stage is obviously amiss in the Biblical verse above: - Adolescence.

The conversation on early marriage as relates to Africa cannot be gainfully completed without taking an educative look at the psychological - cultural - historical features of the appearance of this social quandary. There was a stage where Africans in trust, accepted dictated policies from the United Nations, World Health Organization and other colonial constructs, without serious review and tailoring to fit with the African and national cultural situation. I believe such times have passed.

In Africa as with the entire world, adolescence never existed till the beginning of the twentieth century. Really and truly, adolescence was invented recently in the western world as families became smaller and as the government became more interested in the utilization of and fostering of the young adult as well as controlling commercial enterprises targeted at this age group. Adolescence is closely knit with industrialization and urbanization, and its invention and predominance in society was precipitated right after the European industrial revolution. Adolescence brought on the movement of young adults from the work place to the school as big industry in addition to supporting life, became the reason for life.

Child, then adult. This was the format before psychologists decided to carve out a stage between puberty and adulthood when the child was not yet defined as a social adult, though biologically one. Prior to this and what obtains still in rural areas all over the world, the minute the boy or girl hits biological puberty, his or her skills and social development is tested with 'right-of-passage,' or 'coming-of-age,' physical and mental capacity determining cultural functions. Bull jumping, braving whipping and other methods were employed to test his or her mental readiness and physical adulthood. In Jewish culture, the Bar Mitzvah and Bat Mitzvah ceremony for boys and girls respectively marked their transition from boys to men.

Understanding the novel cultures of early marriages; the extended family supported young adults' marriage, as the man did not have to be fully self-reliant to take in his young wife, and the young wife was to be supported by older matrons (other wives or relatives) in her performing her duties. Western nuclear families with total independence and disconnect, necessitates marriage only after a stage of independence development, now called adolescence. It is essential to recognize the training for marriage life in traditional cultures where early marriage occurs. Just like some of us are educated to operate machines, computers and surgical tables, so also are these youth trained for marriage in these societies (think about daughters playing mother with dolls and doll houses). Neither can be applied or simply transplanted from one social environment to the other. Some of us will fare so poorly even at 30 in marriage, having gone through life learning our professions but having no clue about family love and family virtues. Indeed today, from puberty to marriage, we learn next to nothing about family behavior. The divorce rate is no surprise, and neither is the domestic violence and murder rate.

Puberty which roughly corresponds to fertility has a miraculous way of following and riding the trends of social development and nutritional availability. The puberty age is lower among the affluent and also in developed compared to what is regarded as non developed societies. The reasons for this advance in puberty age which today has brought menarche up to 6 years earlier than what used to obtain 100 years ago, is not certain. 'Fertility' seems to come earlier where environmental factors are most favorable.

A child is defined as someone who is pre-pubertal, and the term 'pedophilia' refers to sexual interest exclusively with the pre-pubertal. An adult used to be defined as anyone post pubertal. In Islamic literature, in the autobiographical narration of Aisha, the prophet's young wife, she described her hair falling off and re-growing before she met with the prophet. This informed of Puberty hormonal hair loss and re-growth, and her passing the age of maturity before marriage relations. Passing puberty, the marker of adulthood in biology has also always been the marker of adulthood in humans. This is a point to underlie for all those confused into thinking Islam or any other culture, allow relations with children.

The child who hit puberty became a man before the invention of adolescence and this is still so in traditional and rural settings, and at this stage the young adult was carted off to marriage or to some form of semi-independent apprenticeship. Adolescence is a new interesting period of life during which there is aggravated and exciting opposite-sex (or same sex) social experience, mingling and marriage-free holds-barred interaction and sexual experimentation. This new stage in life is pretty important and useful for separation from the parents and training in higher institutions under care of government regulated college establishments and in a special community of similar adolescents of all sexes.

Adolescence is usually the stage where notorious character is developed, rebellion is exhibited, sexuality and what may be considered strange sexuality is experimented and adopted. This is the stage when single-parent pregnancies are prevalent, as well as the beginning of abortions in societies where single-parenthood is not fanciful or supported.

Teens develop an adolescent identity, which is molded by society and peer directed and repaired. In the western world, a level of independence is given to adolescents. Many live on their own, have jobs and cater for their own expenses. The right to drive at 16, to drink at 18. Today increasingly there is a push to bring down the voting age. Several bills have been proposed in the US to allow younger teens vote. The Scottish Parliament this June approved a bill lowering the voting age for next year's Scottish independence referendum to 16. In most societies also, with marriage comes access to more adult opportunities.

In Africa, teens are not given so much independence and are pampered like kids--still living under their parents and sponsored by their parents, while they fool around college campuses. This is the reason why 'parental consent' is required for teen marriage in the western countries, but an unusual statement in Africa where these young adults are almost always still under their parents.

During this greatest period of heightened sexual desire for men, adolescent men are not encouraged to marry in most modern societies, and only with parental consent. The prior ages of consent and celebrated 'best' marriages, used to be 16 for boys and about 12-14 for girls. Today 18 is set cross board by the United Nations and in many countries; 14-15 is set as the lower limit for females (with parental consent) and 16 for males. In typical African societies, practically all marriages are with parental consent as mentioned earlier and as such, this statement is redundant. Adolescent years are also the years when human beings are most fertile, almost twice as fertile as they are by thirty, and also this is the period when the body recovers best after pregnancy. Another advantage of adolescent pregnancy is as revealed by new studies, the cancer preventative effects, - a reduction in the risk of breast cancer by 50% in women who have babies as teens. Obstetric fistulas are usually associated with teen pregnancy, this is not scientifically substantiated. In Nigeria for instance, 78% of marriages in the north fistula belt region are to girls below 18, however there are about 1-2 cases of fistula recorded per 1000 births. This prevalence more reasonably coincides with poverty, poor access to perinatal health care and stunted growth, than with the rampant early marriage births.

Of course when reviewing adolescence, one must consider work life. Unlike the past when at puberty boys became men and went straight to work, today, there is an educational formulation that is regarded as essential to life, and the completion of this usually extends to about age 19-21. We must all complete a tertiary education, or else we go to hell, is the prevailing culture. The reality sadly is that even in places like America at the peak of western development, a college education no longer secures employment. The higher your qualifications, the greater the risk of being too skilled for your employment to be afforded. Technology is gradually replacing employment and this promises to continue at such a dangerous rate that pretty soon gadgets like your cell phone will have taken over your job. Automatic check-out machines, automatic driving cars, diagnostic phone apps. The promises with quantum computing are limitless.

An important question to ask in rural settings where there are simply no schools and no opportunities for the educated is; do we need to practice adolescence and at what age bracket? Which comes first in the complex discussion of development; the securing of an environment that promises education and jobs or the education of a people to provision such environment? Do people make jobs or does the government have to enable such a clime first? These are some of the issues that must be considered before rural populations are turned out into the adolescence cycle with its risks and not its promises. I would suggest that an environment of opportunity is secured and considered in establishing what years youth are locked into adolescence, so they are not just held back to fool around in risky and unrewarding lifestyles. Ultimately our youth must be brought to the discussion table now and individually at their time. Youth must never under any social or religious circumstances be forced into marriage, education or work.