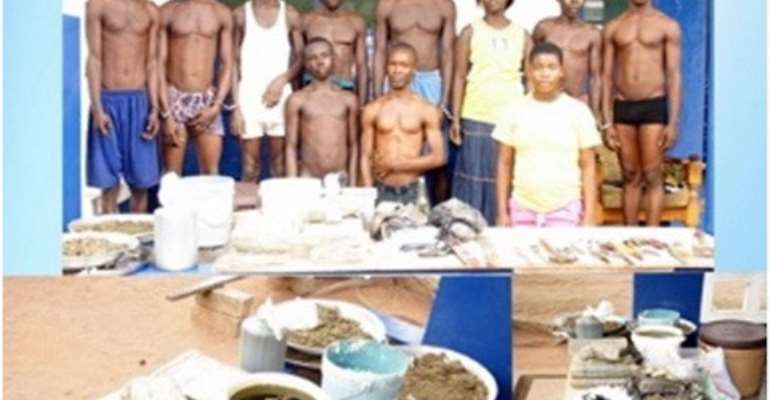 The Elmina Municipal Police Command in the Komenda-Edina-Eguafo-Abrem (KEEA) Municipality of the Central Region has arrested 11 suspected cocaine peddlers, wee smokers and robbers who lodged at ghetto camps at Dentsido, a suburb of Elmina to perpetrate various degrees of crimes.

The Independent newspaper observed that some of the substances suspected to be 'wee' and cocaine have been mixed with local gin as bitters and sold to people who patronize them.

Briefing the press, the Central Regional Police Commander, DCOP Ransford Moses Ninson said, a combined team of personnel from the Regional Task Force and the Elmina police command headed by DSP Godfred O. Asare conducted a swoop at Dentsido, a 'notorious wee base' in Elmina around 5:00 am last week Tuesday.

DCOP Ninson revealed that, four out of the eleven: John K. Mbroh, Gabriel Fiifi Essien, Emmanuel Boateng and George Arthur have been linked to processing substances suspected to be narcotics and charged with the offence.

He noted that, five other suspects who were being held for compounding crime have been granted bail until substantive charge are brought to the fore after identification, while Emmanuel Amoah and Joyce Assifuah believed to be victims of circumstances are on police enquiry bail to assist the police in daily investigations.

DCOP Ninson therefore appealed to the general public whose items have been stolen to come to the Regional Police Headquarters and identify them and also assist in the prosecution of the suspects.

As at press time, the suspects have been remanded into police custody by the Elmina District court and would soon be appear in court.

In a related development, the Regional Police Command has arrested one Daniel Darkwa who has been on police wanted list since September 2012 for shooting a 57 year old Mr. Franklin Hountmond Appiah at his residence at Eyifua, a suburb of Cape Coast.

According to DCOP Ninson, Darkwa on September 10, 2012 shot the deceased in his house while he was watching television with his family and took away some personal belongings. Mr. Appiah died on arrival at the Central Regional Hospital.

DCOP Ninson stated that, on April 30, 2013 his outfit was informed that, Darkwa has been spotted at an area near the Cape Coast Polytechnic where a patrol team later went and arrested him. The Police Commander revealed that, a search on him saw 28 wrappers of dried leaves suspected to be Indian hemp, adding that, the wife and daughter of the deceased have since identified him as the one who shot Mr. Appiah.

Ghanaian Kills Colleague In US
11 hours ago