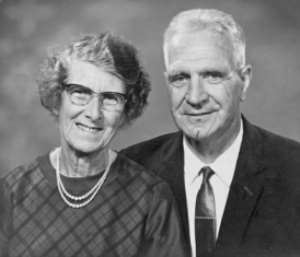 Leaving Europe to Africa for missionaries then was just an ordinary decision but for the late Rev. James Mckeown and his wife Sophia it was a difficult decision because according to their doctor they can't conceive due to the conditions here in Ghana. And true to the doctor's word they departed this earth without a child.

Today his church, the Church of Pentecost has being rated the fastest growing church in Ghana with a membership capacity of 2,102,534 worldwide in 85 countries and 1,810,560 in Ghana according to statistics as in he year 2011 making his spiritual children.

Born on the 12th of September 1900 and received Christ at age nineteen, James Mckeown was sent by the Apostolic Church, UK to Ghana to serve as a resident missionary at the Faith Tabernacle Church in Asamakese in the then Gold Coast which later accepted the Apostolic faith.

According to the Apostolic faith, one needs not to attend a medical facility for treatment because of their belief in divine healing. Just six month after his arrival he felt sick of malaria and was kept in his room for two days when the English district commissioner took him to the hospital now referred to as Ridge in Accra where he fully recovered.

Because of violating the rules and principles of the church, the local leadership decided after a meeting to part away with him which led to its spitting giving birth to the Christ Apostolic Church (CAC) now also being chaired by Apostle Amoani and the Apostolic Church, Gold Coast now Ghana in June 1938.

Again after many years of difficulties in 1953 another crisis led arose which saw large section of the Christ Apostolic Church following Pastor James Mckeown to form the Gold Coast Apostolic Church, then Ghana Apostolic church. In 1957 Nkrumah advised the church to adopt new name.

The church of Pentecost was the name chosen after a revelation through Pastor Wood in 1962. He retire from being an active minister in 1982 and handed over to Apostle F.S Sarfo(late) as the chairman and then relocated to the UK. In 1984, Rev James Mckeown visited Ghana for the last time before his death in 1989 following his wife Sophia's death on January 27, 1983.

His church, the Church of Pentecost has just remembered him through a missionary week for his work which has brought Christ to the door steps of so many people. Kudos to the current leadership especially the Chairman, Apostle Opoku Onyinah, the IMD, Apostle Emmnanuel Addo, General Secretary Apostle Kodua and all the leaders of the church of Pentecost.

His name can never be excluded from the history of many Christian Churches across the globe as to whether they originate from the churches he helped found such as:

After reading this, just try and trace the root of your church and see where it originated from.